I bet many out there in the Trek verse are aware of Star Trek Phase II, formally known as Star Trek New Voyages. It is the first of highly successful online Trek series’ and the one that got independent online productions on the map.

For those new to the verse or old timers unawares, Star Trek Phase II is an independent online presentation of the continuing voyages of the television’s original Star Trek series from the end of the third series and into the last two years of the five year mission on the U.S.S. Enterprise led by Captain James T. Kirk and crew. The series began in 2004 and celebrated its 9th anniversary this year.

Yet, the Star Trek Phase II website is much more than just a site for watching and downloading episodes of those continuing voyages. Did you know the site plays host to its own eMagazine designed to give access not found on the website or its discussion forum? I have read through a couple of the zines and they are full of exciting and interesting tidbits, interviews, photos of the stars, crew and behind the scenes shots and articles. After reading what it takes to produce these free episodes I grew to appreciate the efforts of creator and producer James Cawley for the tremendous dedication he and his staff, actors and crew put forth in this real labor of Star Trek love.

Also available from the website are downloads, desktop wallpaper and more. The amount of money it takes to produce just one of these well crafted and professionally done Phase II episodes is tremendous. After all, the crew and many of the actors are professional writers, directors, stage professionals, some are Star Trek alum such as Star Trek screenwriter and producer David Gerrold, who dedicate their time and own resources to put out an outstanding property. They are not subsidized by Paramount or CBS, the current owners of the Star Trek franchise, and are prevented by law from gaining any kind of financial reward from their on screen endeavors. However, you can help by donating dollars, time, energy, talent and other resources to the production. There is a Donate section on the site as well to further that effort. 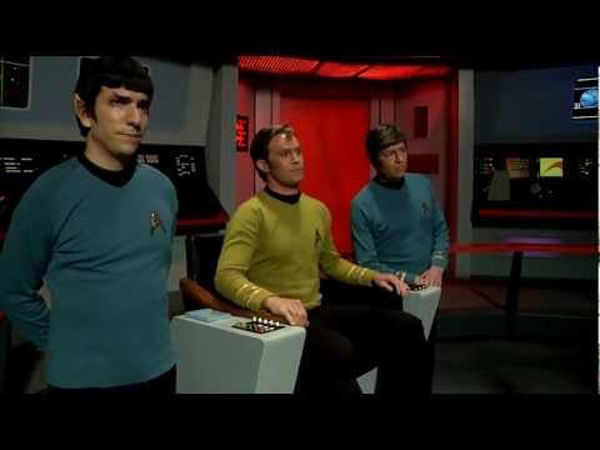 The newest scheduled episode is “The Holiest Thing,” starring the next actor to don the mantle of Captain James T. Kirk, Brian Gross. Brian is no stranger to the big and small screen. He has starred in “Red Tails,” “2001 Maniacs” and “Sorority Boys” on the big screen, did voice work for “Star Wars: The Old Republic” video game and had recurring roles or guest starring roles in over 20 different TV shows such as “Buffy the Vampire Slayer,” “CSI: Miami,” “Psych” and most recently “2 Broke Girls” and “Anger Management.” Former Kirk star James Cawley is now dedicating most of his time in the area of producing and starring as James T. West in the company’s other remake series of “The Wild, Wild West.” I guess James T. will forever be a part of James Cawley’s life.

Production for “The Holiest Thing” began in June 2013 and is well on its way. It will unite Gross with Brandon Stacy (Spock) and John Kelley (Doctor McCoy) as the famed space traveling trio continue going where no one has gone before.