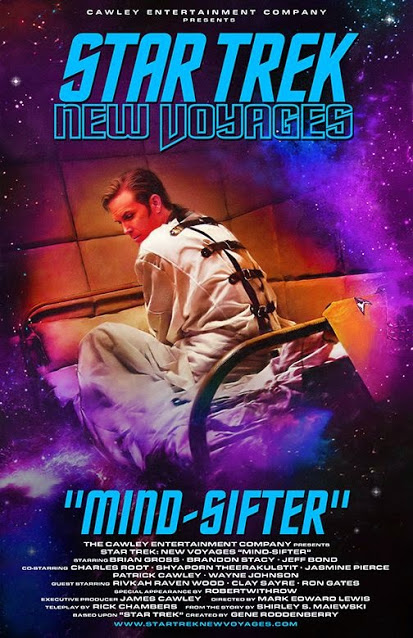 Star Trek New Voyages: Phase II has finally released its long awaited and equally long overdue next episode. In fact, this episode titled “Mind-Sifter” wasn’t originally to be introduced until the episode “The Holiest Thing” was unveiled, however, due to production issues the reordering was required. Which is rather cool since this kind of thing happened from time to time in TOS. The first episode featuring William Shatner as Captain James T. Kirk was actually aired second when the show premiered in the 1960’s. So Trek fans are no strangers to this kind of occurrence.

Now to “Mind-Sifter.” This is the first full episode in which James Cawley, the creator and Executive Producer of New Voyages doesn’t appear as Captain Kirk. He has stepped down from the bridge in order to further develop projects for his production companies Cawley Entertainment Company (CEC) and Retro Films Studio. Stepping into the center seat of the USS Enterprise as Captain Kirk is actor Brian Gross. He has an impressive resume having appeared in various television shows including, Saving Grace, Las Vegas, Cold Case, Bones and others. His movie sheet is also greatly varied from roles in Red Tails, Big Momma’s House 2, Sorority Boys and most known for the role of Ricky in 2001 Maniacs.

How does Gross fair as Captain James T. Kirk? I will say that after viewing “Mind-Sifter” it will take die-hard Trek fans like myself time to get use to him as this iconic character. There have been few that have adequately filled the shoes of the original – Mr. William Shatner. There have been several that have tried – most notably are Chris Pine, who likely fits the pattern better than most others, however, James Cawley (despite his Elvis hair) certainly filled that void wonderfully before Mr. Pine came onto the big screen. And then there is the other indie Kirk, played by actor Vic Mignogna for Star Trek Continues. Since the retirement of Cawley Vic’s has become my personal favorite indie Shat/Kirk. Brian Gross will likely come to be accepted by me in that position but he is by far the most removed from familiar Kirk as compared to those I have already listed. That doesn’t mean he isn’t a good Kirk, he is simply something a bit different and that’s what will take some getting use to. But, because Gross is such a fine actor and has a quality and kind of charisma that is attractive to viewers it won’t take long for us Trek lovers to cozy up to him.

Brandon Stacy is back in this episode as Commander Spock. Brandon does just okay in “Mind-Sifter.” The actor has been given a lot more screen time and dialogue than in his few past episodes. This longer exposure reveals that his portrayal of the normally emotionless and rigid Spock done to perfection by Leonard Nimoy and Zachary Quinto comes off as stiff and forced. Even Nimoy knew the importance of Spock coming off with a tad of laid-backness and hint of that ugly emotion of frustration in his raised eyebrow. In this episode Stacy’s attempt at frustration and coming into command under the sad circumstances of the plot simply missed the mark for me.

The bright spot in this episode was the new face of Dr. Leonard “Bones” McCoy. It seems that along with the departure of Cawley, actor John M. Kelley who has played the part of McCoy since the creation of New Voyages has been replaced by Jeff Bond. This is my first real exposure to this actor and when I saw in the opening credits that John was gone I became concerned. That worry was quickly lost in the first scene of confrontation between McCoy and Spock on the bridge. I immediately thought, “This guy gets it. He knows the McCoy character.” Right down to the slight southern drawl that actor DeForest Kelley had to even the glances he would give Spock were spot on.

“Mind-Sifter” originated from a story written by legendary “Grandma Trek” Shirley Maiewski. Cawley and David Gerrod produced the episode in loving memory of Shirley who died in 2004. Screenwriter Rick Chambers did the teleplay for New Voyages and Mark Edward Lewis directed.

The story centers around the supposed death of Kirk while with an away time on the planet Nimbus III. After a month long extensive search of the planet for the captain, Starfleet admiral Withrow (played by Robert Withrow) decides it’s time to call off the search and officially places Spock as the new captain of the Enterprise. The crew, not willing to give up on their captain, don’t take the news of Spock’s appointment to the center chair as welcome news leaving a noticeable gulf between Spock and the rest of the crew, including the normally agreeable Scotty. Needless to say Kirk isn’t dead of course and the rest of the story revolves around Spock’s relentless effort to prove it.

In order not to give away the more relevant aspects of this episode I won’t tell you what happened to Kirk and how Spock and crew were able to uncover the truth, but suffice it to say there are Klingons and time travel involved and it was, if I may borrow a Spock-ism, “Interesting.” [Hint: Try to find Cawley’s homage to “Bubba Ho-Tep”]

As indie Trek episodes go “Mind-Sifter” is above average with the look and feel of the original series. As one has come to expect from New Voyages the graphics and special effects are some of the best, especially the planet and starship battle scenes. Maiewski’s script was flawless and apart from a few amateurish performances, was delivered quite well. I do look forward to “The Holiest Thing” when it gets released in order to more fully appreciate Brian Gross’ interpretation of Captain James T. Kirk.