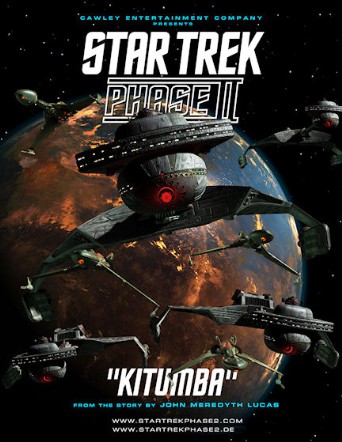 The long awaited next episode in James Cawley’s Star Trek Phase II has debuted online and fans will not be disappointed. Titled “Kitumba,” the story centers around the beginnings and development of the Klingon Empire as we have come to know it by the time of the Jean Luc Picard era of Trek.

This episode boasts of several new developments. It is the last in which Cawley will star as Captain James T. Kirk after 10-years in the center seat. His duties as Senior Executive Producer of this and several other growing projects within his production company (Cawley Entertainment Company/Retro Film Studio LLC) can no longer afford him the pleasure of portraying his childhood idol – James Kirk. The seat on the bridge of the Enterprise will now be filled by actor Brian Gross as Captain Kirk when the episode “The Holiest Thing” debuts later this year.

The story written by John Meredyth Lucas was a concept originally submitted for the undeveloped continuation of Captain Kirk and crew for a followup television production in the 1970’s which would have seen the return of William Shatner and the rest of the Star Trek actors to their former roles in the Original Series. However, the network never picked it up and the Star Trek movie franchise was born with “Star Trek the Motion Picture.”

Cawley’s Star Trek Phase II series (formally called Star Trek New Voyages) opted the Lucas script for their famous online Trek series. Many of the ideas formulated in the original script were eventually made manifest in some of the Klingon backstory found throughout the Star Trek: The Next Generation television series.

Cawley makes very little change to the Lucas script keeping in tact much of the original ideas and concepts found there. Kirk and the crew of the Enterprise are sent on a secret mission to the Klingon home world Qo’nos, much of which is still very shrouded in mystery to the Federation and Starfleet. With the help of a Klingon that is aiding the Federation, Starfleet intelligence learns that a strong faction within the Klingon government is planning a war on a massive scale against the United Federation of Planets in strict violation of the Organian Treaty. The leader of this growing faction is bold because it appears the Organians are no longer monitoring the activity between the Federation and the Empire. It becomes the job of Kirk and crew to thwart this attempt at war which would ultimately mean the destruction of both sides. Kirk finds himself walking on the razor-sharp edge of Klingon tradition, duty and their perception of honor.

This “Kitumba” episode is a major informational bridge between what we knew of the Klingons from The Original Series (TOS) and how we came to understand them in The Next Generation and Deep Space Nine and if for no other reason for canon and continuity sake that makes this a must see episode. Fortunately, Cawley and his top notch professional cast and crew give us many more reasons than just this one to watch.

Costume designer William Ware Theiss worked to bring the attire of both Federation, Klingon and other alien races fit perfectly in that TOS world. Theiss was a costumer on the set of The Original Series and The Next Generation.

It is in this episode we finally learn how the Klingon Empire we became so familiar with during The Next Generation’s 7-year run was born. How it moved from Emperor worship to the beginnings of the Klingon Chancellory, the early stages of the Klingon High Council and the importance of the different ruling Houses in that Council. Most importantly we learn why the one-time honorable House of Duras was cursed and why by the 24th Century the Duras sisters Lursa and B’Etor were so desperate to regain their family honor by the rule of Klingon.

The picture quality is the best I have yet seen on any sanctioned or non-CBS/Paramount production of Star Trek and rivals anything seen in a theatrical release. Cawley spared no expense to ensure the viewer a stunning view of space, starships and the first real glimpse at the Klingon home world in Kirk’s era.

As with all productions of this sort the acting appears a bit stiff at times and forced at others but that is completely overshadowed by the Patty Wright adaptation of Lucas’ well written script and production quality of the piece.

As a fan of anything Star Trek this one rates high on my must see meter. Download it ASAP – if you have a big screen HD TV I highly recommend viewing it from that medium over your smaller screen computers because the detail and resolution is just that good.