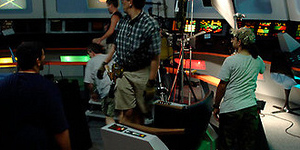 10-years ago a struggling Elvis impersonator by the name of James Cawley began making a childhood dream come to pass. He was born just one year after the introduction of Gene Roddenberry’s Star Trek original series and growing up in Ticonderoga, New York he became enamored with the vision that the syndicated original Star Trek series portrayed every day on his television screen.

By 1997, long before the days of Kickstarter, Cawley started scrimping and saving every penny he could from his growing career as an Elvis entertainer and began collecting an array of TOS costumes, props and abandoned sets from the Desilu and NBC studios. He bought an old used car dealership building and lot in upstate New York, got a small dedicated crew of carpenters, electricians and handy-persons, began building new sets and incorporating those he had collected and soon the entire bridge, lounge, transporter room, sickbay and crew quarters of the NCC-1701 USS Enterprise was reborn. It was a tight fit but the production quality of Cawley’s endeavor has stood the test of time.

Since that time, what started out as a fan production known as Star Trek New Voyages, has grown into a well respected, high quality and expensive continuation of the original 5-year mission of the USS Enterprise and its crew. The show has seen the addition of some of the top names in behind the camera professionals such as Marc Scott Zicree, David Gerrod, Doug Drexler, D.C. Fontana, Michael Reaves, Jon Povill, Daren Dochterman and Eugene Roddenberry; as well as actors like Gil Gerard, Denise Crosby, John Carrigan, the late Malachi Throne and William Windom, BarBara Luna, Eddie Paskey and Grace Lee Whitney, Majel Barrett Roddenberry, Walter Koenig and George Takei revising their iconic TOS roles.

Cawley starred as Captain Kirk for nine of those ten years. That role has now been taken over by the well established actor Brian Gross (Saving Grace) as Cawley is dedicating most of his time to the role of executive producer and studio head of Cawley Productions and the Retro Films Studios where he is busy refitting productions of Buck Rogers and The Wild Wild West along with continuing to oversee the on-going episodes of Star Trek: Phase II.

The latest news from Phase II is the creation of an entirely new 13,000 sq. ft. studio where Cawley will be able to re-create all the sets from the original 1960’s show, in the way they were in the Desilu Studio all those years ago. With these new digs the cast and crew of Star Trek: Phase II will be able to continue bringing fans the kind of quality and dedication to the original Star Trek series that Cawley set out to do a decade ago. These internet voyages were the first and continue to lead the way for others to follow.