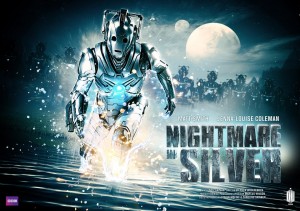 After penning the Hugo-nominated “The Doctor’s Wife,” best-selling author Neil Gaiman says he  believes he was done writing for Doctor Who.

But when producer Steven Moffat asked Gaiman to help make the Cybermen “scary” again, Gaiman admits it was an opportunity he couldn’t resist.

“And that (e-mail) got to me because when I was a kid, I was a huge Patrick Troughton fan.
Patrick Troughton was my Doctor,” Gaiman said in a press call earlier this week. The author went on to cite the second story featuring the metal adversaries, “The Moonbase” as an early influence on his imagination.

“So I started thinking, well actually, I loved the design of the clanky, clanky theme punk Cybermen but I know that their time is coming up and wouldn’t it be fun to actually see if I can make them more scary,” Gaiman says.

In order to do this, Gaiman borrowed a page from 28 Days Later. He’s made the Cybermen faster than they have been traditionally portrayed in the classic serials and up to this point on the revived series.

“And I thought, well, Cybermen, you know, they talk about upgrading. Let’s watch them upgrade. What would an upgraded Cyberman do? I thought, oh, one of the things it would do is move pretty fast,” Gaiman says. “I loved the idea of a Cyberman that was essentially so dangerous that if you find one on your planet, you blow up the planet. You know, planets are
expendable but a Cyberman, if you can’t destroy it immediately, is not.”

And while fans may begin expecting an episode per season from Gaiman, the author insists he may not always have the time to write future installments. But if he does get the chance again, he wants to try his hand at creating an original and memorable adversary for the Doctor along the lines of the Cybermen, the Daleks or the Yeti.

“That would be wonderful. The trouble with everything these days, for me, is time. There is only one me. There’re a ridiculous number of demands on my time. There’re so many things I’m
trying to do and, you know, it’s so much more when I’m going to get time to do this, if I get time,” Gaiman says.

You can tune into Gaiman’s next installment of Doctor Who, “Nightmare in Silver” tonight on BBC1 and BBC America.