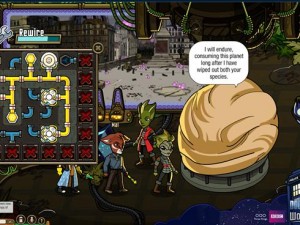 Created in partnership with Three Rings, the award-winning developer of
persistent online worlds Puzzle Pirates and Spiral Knights, the game
transports fans and gamers alike on a journey throughout the boundless
Doctor Who universe.

Doctor Who: Worlds in Time offers something for everyone, including an
intriguing narrative for sci-fi followers and serious gamers and stimulating
missions for game enthusiasts looking for a quick pick-up-and-play game.
After preparing the TARDIS, players travel to various immersive worlds
(including Ember, Mars and New New York) and work together to defend
civilization against infamous villains (including the Weeping Angels,
Cybermen, Daleks, Autons, Oods and Zygons) bent on creating chaos and
destruction in the universe. Since the open preview launch in December 2011,
the BBC and Three Rings have worked to make more Doctor Who environments
available, as well as introduce additional virtual items and create deeply
engaging communal features.

“Worlds in Time offers players a multitude of elements and opportunities to
socialize,” said Robert Nashak, Executive Vice President, BBC Worldwide
Digital Entertainment and Games. “From introducing beloved characters and
progressive storylines to presenting additional guild play, our goal is to
become the largest Doctor Who community ever assembled, while also being an
enjoyable experience for all players.”

While Doctor Who: Worlds in Time is free-to-play, ,players can enrich their
gameplay and hasten their progress through the purchase of Chronons, which
help them to customize their avatars, complete mini-games, build new
contraptions and more.

“I have been a fan of Doctor Who since I was a child, so developing this
game with BBC Worldwide is a dream come true,” said Daniel James, CEO of
Three Rings Design, Inc. “Like the Doctor, we have our own mission, to
provide Doctor Who fans an experience matched only by the wondrous TV
series, and casual gamers a warm opportunity to discover the marvelous world
for themselves. It’s exciting to see the Doctor Who universe come to life in
such a unique way.”