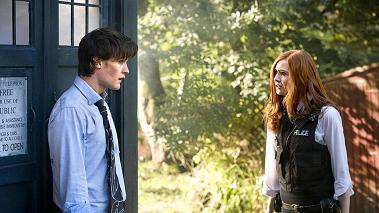 The first story by any new Doctor is one that fills fans with anticipation and trepidation.  Get it right and you launch the new era with style, grace and winning over the idle fan who may be tuning in to see what this new Doctor is like. Do it wrong and you risk alienating now only the casual fan but also your core audience.

Add to it the pressures of introducing a new producer after the commercially successful run of Russell T. Davies at the helm and you’ve got a lot of pressure for a single one-hour episode of “Doctor Who.”

Thankfully, “The Eleventh Hour” is more than up to the task of transitioning to two new eras for the world’s longest running science-fiction series.

Producer and writer Steven Moffat wisely doesn’t keep the new Doctor on the sidelines for his first story, allowing viewers a chance to get to know Matt Smith as the 11th Doctor and to learn a bit about his character.  In the spirit of some of the earliest post-regeneration stories, the new Doctor still feels some after effects of the change that has just taken place but they don’t overwhelm him, putting him on the sidelines for large periods of time.

Smith effortless slips into the role of the 11th Doctor, creating a fascinating persona for the Doctor that is equal parts mysterious and familiar and compellingly watchable.  Any fears that most fans have in the wake of David Tennant’s departure from four years of successful work on the show will be quickly dissipated.  Watching Smith work here, it’s easy to see why Moffat and the BBC chose him for the role.

Equally good is Karen Gilliam as new companion Amy Pond.  Moffat takes an interesting twist in introducing us to Amy, allowing the story to be just as much about Amy as it is about the new Doctor.  It’s not quite as companion centric as “Rose” was five years ago, but the storyline works well enough so that by the end of the hour viewers will have an idea of just who these character are and be eager to travel with them through time and space for the next several months.

Moffat’s scripts have always been less bursting at the seams that Davies and that new sensibility shows here.  The story begins with the new Doctor meeting a young Amy Pond and trying to determine why she’s so afraid of a crack in the wall of her bedroom.   She’s also hearing noises about the escape of prisoner zero.

Forced back to the TARDIS, the Doctor promises to return quickly, only to not turn up again for a dozen years.  Prisoner Zero is still a problem and one that will soon threaten the entire world.  A fleet of alien ships from the prison world show up, demanding the prisoner’s surrender or return within 20 minutes or they’ll destroy the Earth.  The Doctor decides he can’t allow this to happen even though he’s only got his wits to save the planet since the TARDIS is repairing itself and the sonic screwdriver got destroyed.

The tension builds slowly over the course of the hour and there are some genuinely suspenseful, creepy moments in the course of the show.   Moffat’s script walks a deft balance and does it well.   One of my fears with Moffat taking over it that it’s easy to deliver one killer script a year for the show, but not that he’s the main guy, can he deliver the goods consistently.  So far, his era is off to a fine start, though the jury is still out on the long-term impact.

For now, “The Eleventh Hour” is a solid first story that does everything it needs to do and does it well.  After a year of over the top, event stories with the specials, it’s nice to get back to a straight-forward and entertaining story that kicks off the start of a new era.