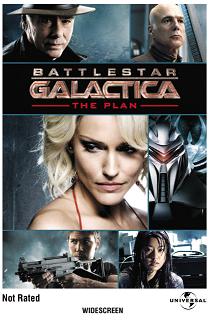 A must-see for “Battlestar Galactica” fans

“The Cylons were created by man.  They evolved. They rebelled.  Some look human.  Some are programmed to think they are human.  There are many copies and they have a plan.”

While the series finale of “Battlestar Galactica” did a nice job of answering most of the questions raised by the series, many fans will say there was one essential question that the series never really answered–just what exactly was “the plan” the Cylons were working under for so many years.

Thankfully, the latest direct-to-home-theater installment of “Battlestar Galactica” has come along to provide audiences with a better understanding of what that plan was and how it evolved over the course of the show.  “The Plan” is a re-examination of the history and story of the first year of the re-imagined “Battlestar Galactica.”  Working for a script from long-time Mutant Enemy and “BSG” staff writer Jane Espenson, “The Plan” doesn’t go back and radically re-write the history of the show so much as it puts in a few new brush strokes to the overall tapestry.

The result is a fascinating, compelling two hour experience that will have long time “Battlestar” fans recalling why we fell in love with this series to begin with and may make you want to re-examine the first two seasons again on DVD as soon as you’ve watched the DVD and explored the wealth of great extras on the disc.

“The Plan” begins a few days before the Cylon attack on the Colonies and follows the lead-up to and the fall-0ut from the destruction of humanity from the Cylon point of view.  Espenson’s script centers on Brother Cavil, expertly played by Dean Stockwell, and follows two copies of Cavil in the days, weeks and months following the destruction of humanity.   If you wondered why Cavil met the fate he did in the final episode, what you see here will add a lot of texture to that final moment.

On one level, the film works in that it fills in some gaps in the series’ history, including a fascinating look at the Cavil that was with the fleet.  This Cavil is one who is hell-bent on the destruction of humanity, seeing the humans as little more than cockroaches that need to be exterminated.  As the story unfolds and this Cavil appears solely focused on the ultimate goal of wiping out all humanity and seeing how he cajoles, manipulates and intimidates his fellow Cylon models to carry out his vision is a fascinating and compelling journey.

Events also unfold on Cylon occupied Caprica with a Cavil there, working with the rebels and undergoing a significant change in motivation and his devotion to the plan as the story unfolds.   Of course, this Cavil knows who the final five are even if they don’t yet, so there are some great scenes with those characters that take on a deeper meaning within the context.

Director Edward James Olmos expertly weaves in new footage with snippets from old episodes of the show.  This is no clips show, but is instead a re-examination of the history of one of the best shows of the last decade.  And while it’s easy to say the entire cast is superb, the movie itself is a showcase for veteran actor Dean Stockwell.  Stockwell’s work as both Cavil’s is compelling, fascinating, chilling and it will keep you rivetted to the best of the spin-off movies from “Battlestar Galactica.”

Released months before it will air on SyFy, “The Plan” is an extended and unrated cut of the film.  Much like this year’s “Caprica” release, the movie does include some nudity.   The film also runs longer than it might on basic cable, but yet none of what we see here feels like filler or wasted time.  It will be interesting to see what is edited out for the broadcast release.

Even at close to two hours, there are still a wealth of deleted scenes on the disc to enjoy after you’ve seen the film.   As with most deleted scenes, they fill in some gaps but aren’t essential to the flow or progression of the film.  There’s also a commentary by Olmos and Espenson about the film that is remarkably revealing and worth listening.  Hearing how the two worked together to find this new take on the familiar story is compelling.  Espenson has been a treat on other DVD commentaries and she continues that trend here.

Also on the disc are some documentaries about the cast and crew working with Olmos and, of course, a preview for the entire series run on DVD and BluRay.

One word of warning though–if you’re a “BSG” novice, this may not be the best place to start.  The film covers a lot of ground and assumes you know certain events, moments and beats that are coming up. (Watching as Cavil turns the fleet Boomer on and off to carry out his will is fascinating, but takes an even greater nuance if you know what Boomer will do at the end of season one.)

We’ve heard that SyFy may want more one-off films set in the “BSG” universe.  However, we’ve not heard any plans for such films so this may be our last look on a favorite universe.  If that’s the case, then “The Plan” is a triumphant departure to the universe and a solid coda on one of the best series not only of the last decade but all-time.

If you’re a “Battlestar” fan, this is a must-see.

To break bread with Edward James Olmos, known to the vast legion of Battlestar Galactica fans as “Admiral Adama” is an occasion as rare as the Eye of Jupiter! However, one lucky Battlestar Galactica fan will be granted this very special opportunity, should he or she prove worthy! Go to www.ugo.com/battlestarcontest for details on how you can share a dinner table with the Admiral himself, Edward James Olmos!