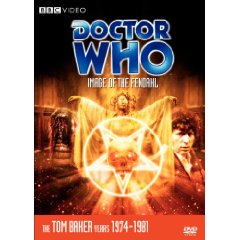 Before he went on to produce and write many of the best-regarded segments of “Blake’s Seven”, writer Chris Boucher contributed three stories for “Doctor Who.” All three stories are solid, entertaining stories from the “Doctor Who” pantheon, but a lot of times it feels like his third script, “Image of the Fendahl” gets overshadowed by his other two contributions from season 14.

It’s not that “Fendahl” is a bad story. It’s a solid, entertaining and probably the strongest story from the classic series’ fifteenth season. But because the series is at such a crossroads in terms of tone and style–transitioning from the Gothic horror of the Hinchcliffe era to the most humorous tone of the Graham Williams era–it’s easy to overlook “Fendahl” when it comes to discussing great examples of classic “Doctor Who.”

If you watch the series in order, “Fendahl” often feels like the last victory lap for the Hinchcliffe era. The story, involving a discovered skull that could release an ancient Time Lord legend intent upon destroying Earth and the universe, is one clearly deeply entrenched in the Gothic horror of the Hinchcliffe years. But there are enough moments of the trademark humor that would define the Williams era in later seasons to give fans the best of both worlds as it were.

It also helps that “Fendahl” is a solidly acted, directed and, with the exception of some dodgy effects late in the game, visualized story. Tom Baker is clearly in his stride as the fourth Doctor here, but isn’t quite as prone to the excesses that will later plague him. An early scene involving the Doctor questioning the involvement of cows in the unfolding plot is one of the more subdued and riotous of the era, showing Baker’s deft ability to find the humor in a given situation. The humor gets a stark contrast a few episodes later as Baker very seriously plays a scene in which contact with the pivotal skull causes him great distress and pain, leading to one of the more effective and memorable cliffhangers of the fourth Doctor’s era.

But as good as Baker is, it may be Louise Jameson as Leela who steals the show. In a season in which the production team seemed less and less willing to write for Leela as an Eliza Doolittle like character, “Fendahl” provides Jameson with a showcase for the character. It shows just how strong Leela was and could be when written well. It also points out how vastly underutilized the character was in other stories from the season.

Coming to DVD, “Fendahl” offers the usual compliment of solid extras that fans have come to expect from the classic series range. While the commentary is a bit of a letdown, it’s only because all the principles are from in front of the camera, leaving no one to offer insights from a different perspective than the actors’. Given that Boucher participated in the commentary for “Robots of Death,” his absence here is sorely missed. But at least we get Tom Baker and Louise Jameson who play off each other well and occasionally offer some fascinating insights.

The rest of the extras are the usual solid slate of documentaries, talking about the story itself. The most fascinating extra is the deleted and extended scenes. They’re not earth-shattering, but it’s still fascinating to see what didn’t make the cut and to imagine what the story might have been with these additions.

Interestingly in a month with the release of “Deadly Assassin” in the U.S. line, it’d be easy to assume that story (given its pivotal nature in series’ history) would have the best extras. However, of the two Tom Baker stories released, it’s “Fendahl” that has the more comprehensive and relevant set of extras. “Deadly” may have a better commentary and story, but “Fendahl” is the better overall package.