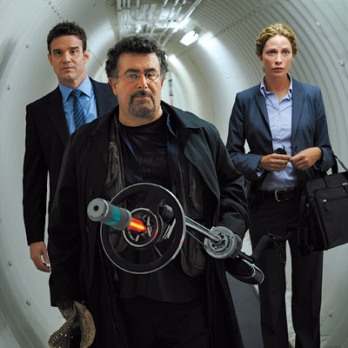 “Warehouse 13” definitely lives up to its name. It is the story of an underground government storage facility hid away in the Badlands of South Dakota that houses every conceivable strange and harmful device both modern and ancient. This is the place where the Ark of the Covenant was stored in the final scene of the Indiana Jones film “Raiders of the Lost Ark”. It is the U.S. government’s most Top-Top secret facility and is supervised by a very politically powerful and mysterious woman named Mrs. Frederick (played by CCH Pounder) since the early 1950’s who seems to haven’t aged beyond her cougar years over the last 50+ years. The on-site director of this gargantuan warehouse is the beefy Artie Nielsen (portrayed by Saul Rubinek).

The two main stars of the show are relative newcomers Joanne Kelly (“The Dresden Files”) and Eddie McClintock (“Bones”). They portray Secret Service agents with totally differing styles of investigation. Kelly’s character, named Myka, is a Type-A details-driven no-nonsense agent while Pete (McClintock’s character) is a hands-on vibe-feeling investigator who may miss the fine print but always sees the big picture. Even though the two of them get off to a rocky start it soon becomes clear that together they make one helluva investigative team and are the perfect pair for work of this type. They’re a bit like Fox Mulder and Dana Scully without that FBI couple’s sulleness. In fact, think “X-Files” only not as well written, “The Frighteners” only not as frightening, “Indiana Jones” only not as adventurous, “National Treasure” only not as action-packed. All that being said — I still kind of like the SyFy Channel’s new show.

The pilot episode, which airs on SyFy July 7, 2009, begins a bit shaky and awkward but soon picks up the pace.

Two reasons I hold out hope for the show’s long future are Pounder and Rubinek. While Kelly and McClintock are a delightful couple to watch on screen, it is these two veterans that really make this show work. Rubinek, known for roles in other genre features such as “Star Trek: The Next Generation,” “Lost” and “Stargate SG1” brings credence and credential to the show. The award winning Pounder always brings her A-game to any performance. Most may remember Pounder in her Emmy-nominated role on the Emmy winning FX dramas “The Shield” and NBC’s “ER”, however, Pounder is also no stranger to the scifi genre. She stars in the upcoming James Cameron big screen film “Avatar,” was the voice of Amanda Waller in the TV series “Justice League” a regular character of fan fave “Millennium” and guest-starred in a host of genre-related shows like “X-Files,” “Quantum Leap” and more.

The only advice I can give our readers is don’t let the pilot episode dissuade you from watching the next episode…or the next. Like most pilots these days it won’t necessarily grab you instantly…and we are the instant gratification generation. Stick with it for week two and three and I have a feeling that, just like “Farscape” you will get hooked on these characters and their weekly adventures.