A can’t miss episode to end the first season 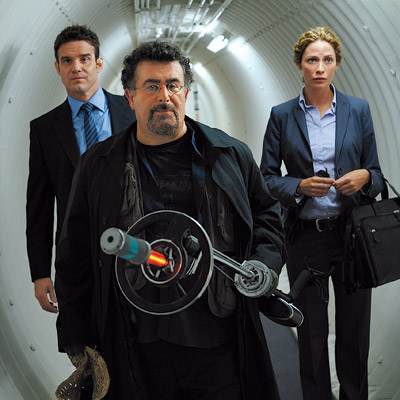 In the excitement of the broadcast networks kicking off their fall season, it might be easy to overlook the fact that one of the more enjoyable series of the summer season is coming to a close Tuesday evening when SyFy gives us the season finale of “Warehouse 13.”

But overlooking the season finale to “Warehouse 13” would be a big mistake.   In the past three months, “Warehouse 13” has grown beyond its clunky-at-times pilot into an enjoyable and entertaining series.  It’s done this by making good use of familiar SyFy guest stars, expanding the characters’ backstory and creating a loose arc around actor Roger Rees who portrays Artie’s former partner, MacPherson.

The finale, titled “MacPherson” finds the entire “Warehouse 13” crew working to try and catch up to MacPherson.  It will also explore a bit more of the conflict and backstory of the past partnership between Artie and MacPherson, as well as answer a few questions fans have about the two.   The finale deftly balances resolving some long-term plot lines as well as leaving some of the threads in place for the second season to pick up on.   Any scenes that involve Rees or actor Saul Rubinek simply shine and are absolutely riveting.   This isn’t to discount the work being done by leads Eddie McClintock or Joanne Kelly, both of whom have really grown into their roles as Pete and Myka in this first season, but this episode is really a showcase for Artie and MacPherson.

The finale finds MacPherson attempting to arrange an auction of various Warehouse artifacts.  But is it an auction or a trap for Artie, Pete and Myka?  The game of cat and mouse between the two parties keeps the first half-hour jumping and interesting, but it’s the last half-hour that will probably have fans buzzing for the weeks and months to come as we wait for second season.   Along the way, we’ll have some double-crosses, as well as some answers revealed.  Thankfully, the show understands just how to give out enough answers to satisfy the viewer without giving away the entire game or leaving you wondering just what they can do in season two to top this.

And as the hour ends, you’ll be thankful the series has been picked up for a second season.  Not only because of the answers given and the new plot threads put into place, but also because in a summer full of a lot of bad reality series, “Warehouse 13” has been a light and refreshing change of pace and a journey you won’t want to see end after just these thirteen episodes.