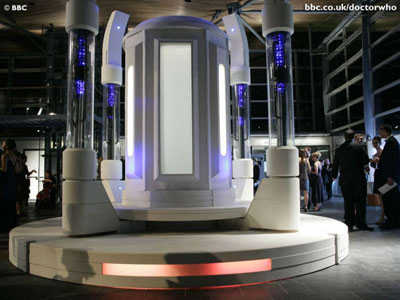 When the one-minute preview for the rest of series three excites you more than the 41-minutes of story leading up to it, you know something’s wrong.

It’s not that “The Lazarus Experiment” is necessarily a bad episode of “Doctor Who.” It’s something far worse–a rather dull one.

The Doctor brings the TARDIS back to the current time, intending to drop Martha off since her promised trip in the TARDIS is now over. But before he can leave, he sees reports of an experiment being run by a scientist named Lazarus that promise to re-define what it means to be human.

In the first of many coincidences for the script, Martha’s sister works for Lazarus and gets the two on the guest-list for the big unveiling. Turns out Lazarus has invented a device that allows him to roll back his age…but he didn’t think the consequences of this move all the way through. Seems he forgot to stabilize his DNA after the experiment was over, causing him to morph into some kind of scorpion like creature that needs to feed on the life-force of humans to stabilize and stay alive.

Which all leads to the inevitable “Doctor Who” classic moment–running about corridors. The experiment and transformation all happen within the first fifteen minutes of the story and what we’re left with is thirty minutes of a chase sequence–not once but twice. At one point, the Doctor defeats Lazarus and he appears dead…only to resurrect in an ambulance and hide out in a cathedral. Luckily, the cathedral has the exact right set of circumstances to allow the Doctor to finally defeat Lazarus a second time–after a whole lot of running about, of course.

Visually, the corridors are stunning but they’re still just that–corridors. And the premise is an intriguing one, though it never quite gets explored as fully as I’d hoped. Why did Lazarus start this experiment, for example? And we’re teased a bit, finding out that the mysterious Mr. Saxon has funded the project and is interested, but beyond that we get nothing. I expect we may come back to this at some point in the season when Mr. Saxon makes his appearance.

And for a story that tries to give humanity the ability to do what the Doctor can–regenerate–you’d expect something more of it. I found myself wondering what compelled Lazarus to pursue this line of research and if there wasn’t another agent behind it? We previously heard the hints of another Time Lord being out there….could this Time Lord be trying to cheat death by Lazarus’s experiments? (If the villain of the season is who it’s rumored to be, that would make a whole lot of sense). Also, I wondered if this was some attempt to get the Doctor out in the open and part of some larger trap.

At several points in the story, an agent of Mr. Saxon comes to Martha’s mother and warns her about who the Doctor is. Martha’s mother is already not a fan of the Doctor and this only makes things worse for the new traveling companion for the Doctor. The Doctor, once again, gets slapped by an angry mother.

That said, the episode did have some nice moments. The Doctor debating what has been done with Lazarus was a nice touch and there were some hints that Lazarus may know about the Doctor’s true nature than he’s telling. The scenes with Martha struggling with her title in the TARDIS crew is a nice bookend to the episode and overall the acting by everyone is up to the task.

It’s just a shame the script itself is so lackluster. As I said to start things out, I didn’t hate it, but I wasn’t enthralled either. Three weeks ago, “Gridlock” showed us how characters can drive a story relatively short on plot. This time around, the story is short on plot but arranged as such an action piece that the gaps show through.

That said, series one struggled at times with stories that were introducing concepts and ideas vital to the overall story arc of the season. Hopefully that is what “The Lazarus Experiment” is doing here and it will improve a bit in my estimation when I’ve seen the whole story that series three is trying to tell.

Until then, I come away a bit disappointed with it…

That said–that preview for the rest of the season was fantastic and I can’t wait to see where the second half of the season takes us.