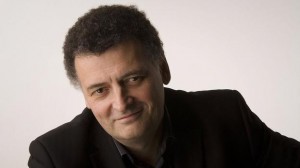 Ask Doctor Who producer Steven Moffat which is his favorite episode of the upcoming eight installments to round out season seven and he’ll honestly tell you it’s the next one. During a recent press conference, Moffat said that he is always so focused on “next Saturday’s episode” that it becomes his favorite.

Moffat then adds that among the highlights of the upcoming set of eight episodes is the return of the Ice Warriors in Mark Gattis’ “Cold War,” Neil Gaiman’s Cybermen script and, of course, the season finale.

But before we get to all of those surprises, Moffat has some thrills and surprises planned for Saturday with “The Bells of Saint John.” The episode formally brings new companion Clara on board the TARDIS and it introduces a new monster to the Doctor Who universe, the Spoonheads.

Moffat says the inspiration for the Spoonheads, who invade Earth using wifi, came from finding something ubiquitous and non-threatening and turning it into a way for aliens to invade Earth. “There’s wi-fi in every civilized country on Earth,” he says and says part of the inspiration for the story was to “grab whatever is omnipresent in your life and make it into an adventure.”

Moffat acknowledged that the Spoonheads could join the rouges gallery of frightening adversaries he’s had a hand in creating since the good Doctor returned to our screens close to a decade ago. Asked which of his monsters he liked the best – Spoonheads, The Weeping Angels or the Silence – says it’s tempting to say the Weeping Angels, but there was just something he liked about the Silence.

“I loved the gimmick that you can’t remember them,” he says adding that the stories with the Angels and the Silence were “designed to be scary” while “Bells” is more of a “action roller coaster.”

In the end, Moffat says it’s not up to him to decide which monster is the scariest. That’s up to the nightmares of the young fans who tune in.

Saturday night also sees Jenna Louise-Coleman joining the TARDIS as the new companion Clara. Moffat says these eight episodes will address the mystery surrounding Clara, a mystery that the Doctor is drawn to in spite of himself. Moffat alludes to the fact that Clara is a bit of a role reversal for the series. In most cases, it’s the Doctor who is aloof and the companion who is a bit “warmer” he says. But in this case, it’s Clara who is aloof and the Doctor who is a bit warmer and curious to get to know more about her.

“[The Doctor]’s absolutely devoted to her,” Moffat says. “Clara is always just a little bit out of reach, a little bit harder to impress.”

Moffat goes on to add that Doctor Who is in his eyes the story of the companion because they’re the ones who change and serve as the audience’s emotional connection to the show. “The Doctor has to happen to somebody,” he says. “The Doctor is an enigma.”

He says that it takes a special character to be a companion to the Doctor saying that he has to imagine someone who “fly away” with the Doctor and someone that the “Doctor would want to fly away with.”

“A lot of people would run the other direction,” Moffat says, including himself. “Imagine someone who is ready to say yes with running away with a clearly insane man in a time machine. You need someone to challenge the Doctor. Throw him into a new light. This time, Clara is the slightly difficult get to know one, slightly difficult one to hug.”

It helps that Coleman and Matt Smith look like a companion/Doctor team when you stand them next to each other, he adds. But a new actress to the series has to be more than just a pretty face.

“She’s a terribly, terribly good actress.  But she can be as beautiful and charming as you like but be nothing on screen if you’re not a great actress,” Moffat says, adding that Coleman brings “fast, snappy style” to the role.

Also coming up in these eight episodes are the return of classic series monster the Ice Warriors in Mark Gattis’ script “Cold War.” Moffat is quick to admit that he wasn’t a fan of the monsters returning to show because he doesn’t believe they’re quite as familiar to the general viewing public as Davros, the Daleks or the Cybermen. Moffat credits Gattis with writing the script and convincing him to bring back the Ice Warriors for this run of episode.

He also says that one of the challenges is taking a monster that looked decent in blurry black and white and making them look good on today’s HD sets. Moffat says that he thinks the character design has done this.

And while some fans are looking ahead to the big fiftieth anniversary story in November, Moffat says he’s focused on what’s coming up next for the show.

“Let’s stick to Saturday,” Moffat says, adding there will be time to gear up for the big anniversary after these eight episodes have aired. “You’re always wanting to make it big and special.”

And while Moffat knows that 2013 is a year to celebrate the series long, rich history, he also understand that he has a responsibility to keep the show moving forward. “It’s all about the next fifty years, not the first fifty year,” he says.

However, Moffat does hint that he thinks the team will deliver and that they’ll stick the landing when it comes to celebrating fifty years of Doctor Who.

Until then, he says he’s just getting ready for Saturday . And he encourages us to do the same.

Doctor Who returns Saturday evening on the BBC and BBC America.