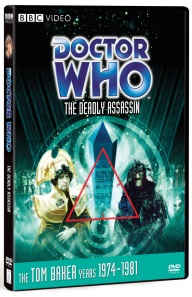 Robert Holmes’ 1976 masterpiece “The Deadly Assassin” is a crossroads for classic “Doctor Who.” The story was so controversial that it influenced and changed forever the series both in front of and behind the camera.

The four-part serial altered viewers’ perceptions and assumptions about the Time Lords and set off a flurry of protests over its infamous third-episode cliffhanger. Both of these forever and radically altered the direction of the series. Not bad for a story running just over 90 minutes in length.

Summoned home by a vision of the High President’s assignation, the Doctor returns home to Gallifrey to try and prevent the vision from coming to pass. He fails and is soon the prime suspect in a web of political deceit instigated by how old enemy, the Master. In order to prove his innocence, the Doctor enters the virtual reality universe of the Matrix to battle the Master’s Time Lord conspirator and flush him out into the open.

“The Deadly Assassin” is one of the classic series’ most iconic and influential stories. In addition to giving us a deeper look at the inside of the world of Gallifrey and its structure, it also introduces the concept of the Matrix and that Time Lords only have 12 regenerations to the “Doctor Who” canon. It also gives viewers a look inside a virtual world a mere 23 years before we saw Keanu Reeves enter the Matrix.

But all of that influence would be negated if the story weren’t a good one. And it is. Robert Holmes is at the top of his “Doctor Who” form with this one, adapted elements from “The Manchurian Candidate” for the universe of “Doctor Who.” Tom Baker has hit his stride as the fourth Doctor, giving us one the only story in the classic series run to not feature a regular companion. The story moves at a solid pace with plenty of suspense and edge-of-your-seat tension. In short, this is a classic of the series that earns that designation.

It was also one that was hugely controversial. A vocal group of “Doctor Who” fans despised the story upon its original broadcast. The head of the Doctor Who Appreciation Society, Jan Vincent-Rudzki notably slammed the story in his initial review and appears in one of the extras defending his stance on the story.

But all of that was nothing compared to the fuss the story raised with the National Viewers and Listeners Association, spearheaded by Mary Whitehouse. Whitehouse had been a longtime, vocal critic of “Doctor Who,” condemning it for the violence and gore of the previous seasons. Her ire hit a high note when the cliffhanger for episode three showed the Doctor with his head held underwater as the infamous stinger and theme music came in. Whitehouse asserted that children would believe the Doctor was underwater all that time and might try to emulate the actions of the story. Her fuss led the BBC to blink, eventually editing the cliffhanger from future showings and leading to producer Phillip Hinchcliffe leaving the show and being replaced by Graham Williams.

One of the extras on the DVD looks at the incident and includes interviews with Hinchcliffe, Whitehouse and director David Maloney about the incident.

And yet, for an undisputed classic, the extras feel a bit lacking this time around. The commentary by Baker, Hinchcliffe and actor Bernard Horsefall is a good one but I found myself wanting a bit more. It’s a shame Robert Holmes isn’t still with us because I’d love to hear his take on the story and his reflections on it years later.

The other extras include a series of documentaries. One looks at the story itself, delving into the development, Tom Baker’s desire for the Doctor to travel without a companion and the controversy. It’s in the examination of the controversy around the story that the documentary falls short. An interview with Jan Vincent-Rudzki, defending his negative review amounts to little more than his saying, “But I just didn’t like it” and there is no fan counterpoint to the side that considers it a classic. And while we do hear Maloney, Whitehouse and Hinchcliffe talk about the famous cliffhanger (which is restored for the first time in years on the DVD), there still feels like there is more to the story that could or should be presented.

The other documentaries are hit or miss. A scholarly documentary examines the influence of “The Manchurian Candidate” but fails to tie it into the story as a whole. And the other on the scary moments in “Doctor Who” looks at a lot of other stories but never directly ties into “Assassin” itself. They’re not bad, but they feel like missed opportunities.

What isn’t a missed opportunity is finally getting the full version of this classic story on DVD. If you’re a classic “Who” fan, this one is a must buy, especially for U.S. fans.  Until now, the only commerical release (apart from iTunes) was a feature format version on VHS with the edited cliffhanger.  This one is well worth the upgrade.  If you’re a new series fan and want to find out more about the Time Lords, this is a great one to pick up or put in your Netflix queue.