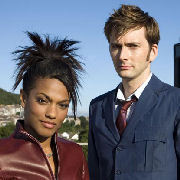 As a “Doctor Who” fan I have to confess something–while I like the overall work Russell T. Davis does on the show as a producer and show-runner, I’ve never been overly satisfied with any of his scripts. He’s got some great ideas, it’s just sometimes the execution of them comes up a bit short.

With that in mind, I have to honestly say I wasn’t really looking forward to this week’s episode, “Gridlock.”

After last week’s wonderful historical drama and knowing this week was written by Davis, I was already starting to count down days to next week’s big return of an old favorite villain.

So, imagine my shock and surprise when halfway through “Gridlock” I found myself not only kind of liking the story but actually enjoying the episode.

The Doctor and Martha travel forward in time to New New York. The Doctor’s old friend, the Face of Boe, detects the arrival of the TARDIS and sends one of his servants to find the Doctor. The Face of Boe is dying and has a final message for the Doctor, which was alluded to and hinted at in last year’s “New Earth.” But before the servant finds the Doctor, he and Martha are seprated and put into the gridlocked shuttle cars beneath the city. As the Doctor tries to find his way to reunite with Martha, they discover something is lurking in the fog in the fast-lanes below the city.

Turns out what’s lurking in the fog is an old villain from the Troughton era–the Macra.

And suddenly, deep down, my inner “Doctor Who” fan is doing cartwheels. Because not only do the Macra come back, but Davis uses them in such a way that it’s consistent with their original appearance way back in those Troughton years.

And if that had been it, it might have been enough. Instead, Davis’ script plays to the strength of Tennant, giving the fans a showcase for the 10th Doctor along the lines of “School Reunion” or “Girl in the Fireplace” last year.

Early on, the Doctor lies to Martha about Gallifrey, something he comes to regret when he fears she may die. The final scenes of he and Martha sitting down and really connecting instead of the Doctor just showing off are wonderfully written and realized. This episode is full of great, quiet moments and it will tug at your heartstrings if you’re not careful.

We do lose an old friend in the course of saving New New York. We also get the final words to the Doctor, which I think will set in motion some things throughout the season. (I won’t give it away here if you haven’t seen it yet).

All in all, “Gridlock” started slowly, building a world, then turned it up with some great character work, the return of an old adversary and a nice ending that made me eager to see how the rest of the season unfolds.

It’s a solid, well done entry by Russell T. Davis and it may be my favorite “Doctor Who” script written by him.

Next up: Back in the 40s in New York City with an old adversary….