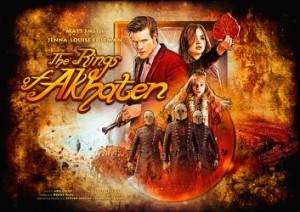 While I appreciate all the complexities of a Steven Moffat written script, every once in a while it’s nice to see Doctor Who take the less is more approach.

As is the case with this week’s installment, “The Rings of Akhaten.”

The Doctor uses the TARDIS to take a peek at several moments in the life of young Clara, including the fateful way her parents met and a young Clara visiting her mother’s grave.  The Doctor then whisks current day Clara off to the Rings of Akhaten, an alien marketplace and pyramids that offers a song to keep a slumbering god asleep.  During a ceremony to transfer the singing duties from one person to the next, a hiccup occurs and the Doctor finds himself coming to the aid of a young girl Clara met in the marketplace and promising to keep the slumbering god from rising and leaving a wake of destruction in its path.

Turns out the alien god wants to feed on not just songs but stories.  The Doctor offers up his stories and memories to the alien god in  a scene that showcase why Matt Smith is the best of the modern Doctors.  Seeing Smith go from rage to despair to triumph all over the course of the scene as he offers up the s Doctor’s stories, memories and secrets to keep the alien at bay was a triumph.  The tears running down the Doctor’s face were a highlight of what was one of the best parts of this episode and the entire Matt Smith era as a whole.

Given the Doctor’s recent desire to disappear from time, the scene fit in well with the theme of re-establishing some of the mystery about the Doctor.

It also felt a bit like Smith was channeling the angry, wounded Doctor we got in Christopher Eccleston’s work and it may explain why the god wasn’t willing to feed on his memories and story as much as he was Clara’s offered story.   Who would have thought that a leaf would play such a pivotal role in not only Clara’s destiny but also saving the universe?

If we get six more installments that have this level of enjoyment, I think series seven could be a real treat.  Easily the best Who installment since “Asylum of the Daleks.”