“The Rhythm Section” has some great action scenes and superb cinematography throughout. The film is brought down, however, by having a cipher as a main character and failing to engage the audience emotionally.

The movie begins at a glacial pace. The first few frames are of Stephanie (Blake Lively) with a silenced gun ascending some stairs in Tangier. Then we cut to Stephanie sitting on a bed looking into the camera. Interspersed are what appear to be old family video from her past. She appears to have had a brother, sister, mother and father, although you don’t really know who they are. I suppose that this is supposed to provide a contrast with her current life, where she operates as a drug-addicted prostitute. But instead it drags on and on.

Finally, a john shows up to engage her services. He turns out to be Proctor (Raza Jaffrey), a reporter who has tracked her down. It turns out that her family died in a plane crash. Proctor informs her that the aircraft actually was blown up by a bomb. She turns him away, although he leaves a business card.

After some more mopey scenes of her in the bathroom, she decides to meet him. His place looks like a serial killer’s, with the wall plastered with photos of each plane occupant. Proctor is being paid to track down the bombers by a wealthy Englishman who lost his son on the flight.

After some further time in the flat, we discover that an ex-MI-6 agent who lives in Scotland is providing intel to Proctor. Stephanie buys a gun and goes to the school where the bomber, Reza (Tawfeek Barhom), is enrolled, despite Proctor having warned her not to confront him as he is the key to finding U17, the ultimate source of the bombing.

She sits down at Reza’s lunch table but is unable to shoot him. When he leaves, she discovers her bag with the keys to the apartment missing. Upon returning to the flat, she finds Proctor lying on the floor with a fatal gunshot wound to the head. 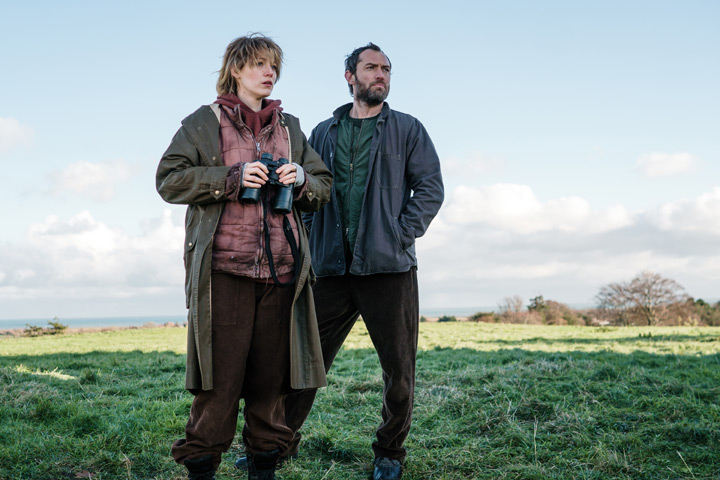 Having botched this up, she next uses a postal code for Scotland from mail from the MI-6 agent to go to the town where he lives. Iain (Jude Law) corrals her and imprisons her in a room so she can detox. She finally convinces him of her sincerity in wanting to get justice for her slain family, so he agrees to train her. In one particularly improbable scene, she swims half-naked across a loch to get home. This entire stretch of training sequences is overlong and uninteresting.

Finally, Stephanie is dispatched to Spain to meet an ex-CIA operative, Marc Serra (Sterling K. Brown), who sells information. She is trying to find Lehmans (Richard Brake), who she discovers now lives in Tangier. Off she goes on a boat. She does manage to kill him, but only because he is deprived of his oxygen tank. On the way out, she is pursued by his bodyguards in a wild, beautifully-filmed car chase.

She goes back to Spain where she offers to kill Giler (Max Casella), the financier of the bombers, in New York. Stephanie travels to America with Iain where she is told to gas Giler during sex and then slash his throat ear-to-ear. The film continues on this inexorable path of revenge until its climax.

Blake Lively does an admirable job playing a shattered person who has little or no emotional affect. The consistency of her portrayal through the entire picture is astonishing. She was very good in “The Age of Adaline” and “A Simple Favor,” so I am not too surprised by this performance. Her willingness to appear unglamorous is also noteworthy.

The drawback of having a character who is a cipher to the audience is that it precludes emotional engagement with the person. I felt no investment in anything she did; I just didn’t care. Jude Law and every other character likewise seem withdrawn and motiveless. I suppose that I am used to having protagonists and villains who are fully fleshed out in their quirks and their psychoses. If these aspects are absent, then what is there to interest the audience?

In a way, this movie is almost a meta-commentary on the need to be vicariously engaged in the action that one sees on screen. By negating this engagement, it forces us to notice our complicity in requiring a vested interest in the material to find it compelling.

I doubt that the film was designed to illustrate this, but rather suffers from a poorly written screenplay. The choice to not tell us much about Stephanie’s family or her relationship with them is poorly made. This absence eliminates a potential anchor on which the audience could stake their emotions and make her a more human character.

Yet, there are pluses to this film. The car chase in Tangier, filmed from a front-seat view as if you were the driver or passenger, is visceral and jarring. It is easily one of the best car-chase scenes I have ever seen in a movie.

When guns are fired in this picture, they sound like guns—they are loud. When a bus is blown up, and Stephanie lies down to avoid shrapnel, the portrayal of the way that the concussion affects her hearing is wonderfully apparent to the audience’s ears. The sound editing and mixing on the production are first-rate.

The director, Reed Morano, is known for her cinematography (“Frozen River,” as an example). This is apparent throughout the film as the sense of framing and shot selection by cinematographer Sean Bobbitt are excellent. The location footage also is lovely. What are problematic are her directorial choices of what to shoot and lingering too long on repetitive images.

I also have to compliment the score, written by Steve Mazzaro. In particular there is a scene in Tangier where the musical instruments mimic human ululation which I found remarkable. The selection of individual songs also is good.

So this is a movie that ultimately fails to achieve its aim but is well-made in other regards. Go for the action and the cinematography, but don’t expect much emotional impact.

Two-and-a-half out of five stars

Blake Lively stars as Stephanie Patrick, an ordinary woman on a path of self-destruction after her family is tragically killed in a plane crash. When Stephanie discovers that the crash was not an accident, she enters a dark, complex world to seek revenge on those responsible and find her own redemption. Based on the novel by Mark Burnell, from director Reed Morano (“The Handmaid’s Tale”) and the producers of the James Bond film series.

“The Rhythm Section” has some great action scenes and superb cinematography throughout. The film is brought down, however, by having a cipher as a main character and failing to engage the audience emotionally.