The movie “El Chicano” is enjoyable enough to watch on screen. However, it has several plot lines and cannot decide which is the focus of the film. This is played out in the confusion over what type of picture we are watching: is it a political/philosophical treatise, a superhero origin story, a police vs. gangs tale, or a personal story about seeking revenge?

After a confusing opening sequence, we flash back 20 years to East Los Angeles. Three boys are out at night. They come to the home of Shotgun, one of the boys, who runs in and gets a beating from his mother in view of the other two, twins Diego and Pedro. They are hiding on the periphery of the property where the local crime boss, Shotgun’s father, is holding court.

Police show up and one of them, Officer Gomez (George Lopez), warns Shotgun’s father about the legendary El Chicano. Sure enough, after the police leave, a mask-wearing motorcycle rider drives by and executes Shotgun’s father.

Back in present day L.A., Diego (Raul Castillo) has become an officer with the LAPD. He is summoned to a warehouse with his partner Detective Martinez (Jose Pablo Cantillo). Several members of the now-adult Shotgun’s gang lie murdered on the floor. Improbably Diego is the only one to discover that all of those executed have the same tattoo on their left forearm, the word “mito” (“myth”) and the birthday of Diego and Pedro. Captain Gomez tells Diego and Martinez that they need to solve the crime quickly before the Feds move in.

Diego has been estranged from his late brother for some time. Pedro dealt drugs and allegedly committed suicide. Diego goes to his mother’s home to look at Pedro’s effects, neatly contained in a box. He discovers several books on revolutions and a personal notebook. He also discovers a photo with someone’s face scratched out. His mother (Marlene Forte) is convinced that Pedro was murdered and she and Diego argue, in a scene that did not need to be as protracted as it was.

Later Diego ends up at his brother’s storage unit. He discovers a secret room that is like the Batcave for El Chicano. All of the garb is there as well as appropriate family photos, weapons, and tools. Diego consults the local historian Jesus (Marco Rodriguez) and is told about the lore of El Chicano.

Diego and Martinez visit Shotgun (David Casteneda) during the day where he is celebrating with the survivors of his gang despite the fact that a slew of his gang members were murdered. They basically just taunt each other in a scene of dubious value. 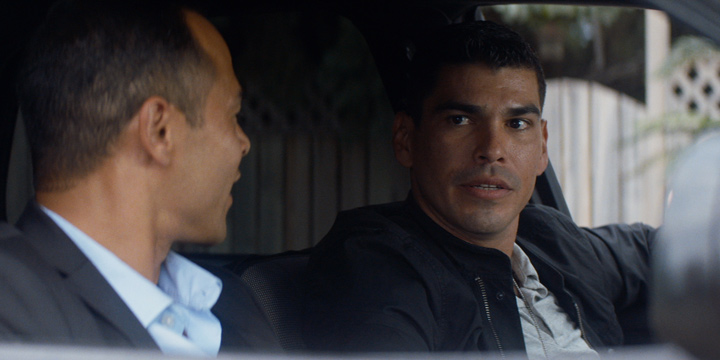 Martinez’s buddy at Homeland Security is able to reconstruct the scratched-out face. Jaws (Roberto Garcia) is the son of a Mexican cartel family who is dedicated to returning the southwestern U.S. to Mexico. He is being released from prison soon. Diego speculates that all of the men who supported his brother and opposed giving the barrio’s business/crime over to a Mexican cartel were executed in the warehouse so that Shotgun could serve his new master with no local dissenters.

In the evening, as Jaws and Shotgun are at a neighborhood welcome party, Diego and Martinez are engaged in undercover surveillance. Suddenly they are fired upon and Martinez starts bleeding out from his neck. Diego flees in the Department’s junker as he is pursued by gun-firing thugs. Eventually a crash occurs. Martinez is dead and Diego is in the hospital, but not for long.

Shotgun and Jaws are now at a nightclub living the high life. Diego, dressed up as El Chicano, walks in and wreaks havoc on Jaws and Shotgun’s associates. Jaws is hit but runs out to a car to escape. Shotgun sees his opportunity and strangles Jaws to death. The stage is set for a confrontation between the cartel, the police, and El Chicano.

The action scenes in this picture are well-done and clearly a highlight. The violence is very realistic, which is to the director Ben Hernandez Bray’s credit, as it shows the true consequences of such action, not the made-for-Hollywood minimization of this activity. The noises of gunfire are loud and the camera work is excellent. The car chase is beautifully filmed.

This being said, the main problem with the movie is that it darts among several themes without doing any of them justice. As a superhero origin story, we only get hints of the mythological trappings of the character. Since El Chicano has no overt superpowers, it seemed highly improbable that one person could handle everyone in the nightclub as expertly as Diego does. The Batcave in a storage unit is brilliant, however.

Another theme is the tension between Diego and his dead twin. We hear about their growing apart, but get no good flashbacks to see it in action. It becomes hard to believe that Diego can get insight into his brother so quickly after years of estrangement.

As for the theme of Mexicans trying to reclaim the Southwest, this is almost an afterthought. We get hints that Pedro wanted to keep East L.A. safe from outside incursions, but with no fully developed philosophy. It is almost as if the screenwriters do not trust their audience to be able to assimilate the subtleties of this issue.

Then there is the gang/cartel storyline. This provides much of the impetus for the action sequences but is muddled with the “reclaim the Southwest U.S. for Mexico” storyline and Diego’s desire to get revenge… for Pedro? for Martinez? for East L.A.? for his colleagues?

Raul Castillo is well-cast as the lead. He is not given enough scenes to show the range of his emotions as an actor. There is an all-too-brief scene with Vanessa (Aimee Garcia) in which they have real chemistry and lighten up the mood somewhat. But otherwise he seems locked into perpetual film-noir mold. 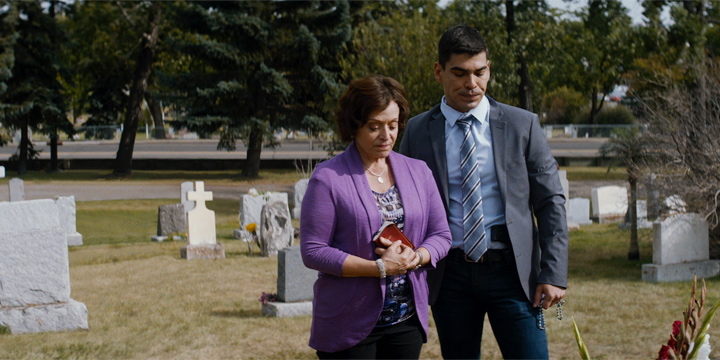 The film suffers as well from a lack of female representation. Diego’s mother is only there as a backdrop to her son’s reactions. Aimee Garcia is perfect in her role and brings some excellent acting to the fore. However, her role is minimized as she is sent away while El Chicano goes on the prowl.

There is a scene late in the film where the cartel takes an action that would result in much more serious consequences on a national level that the movie does not portray. This further erodes the credibility of the story.

The movie never seemed to end as several possible endings hinting at a sequel all appeared in succession. But where would a sequel go? El Chicano, like so many other superheroes, is essentially engaging in vigilante action by his own standards of right and wrong. So is it the villain of the week? I would suggest more flashbacks into the origin and mythology of the character.

Yet despite its problems, I will say that I saw much potential in this film. I was just disappointed that it never panned out completely. But the action is good and so I am raising it half a star for that from a two and a half to three stars. Three out of five stars.

When L.A.P.D. Detective Diego Hernandez is assigned a career-making case investigating a vicious cartel, he uncovers links to his brother’s supposed suicide and a turf battle that’s about to swallow his neighborhood. Torn between playing by the book and seeking justice, he resurrects the masked street legend El Chicano. Now, out to take down his childhood buddy turned gang boss, he sets off a bloody war to defend his city and avenge his brother’s murder.

The movie never seemed to end as several possible endings hinting at a sequel all appeared in succession. But where would a sequel go? El Chicano, like so many other superheroes, is essentially engaging in vigilante action by his own standards of right and wrong. So is it the villain of the week? I would suggest more flashbacks into the origin and mythology of the character.

Yet despite its problems, I will say that I saw much potential in this film. I was just disappointed that it never panned out completely. But the action is good.