I’m a big fan of the Fast and the Furious franchise for a lot of reasons, one of which being what you might not expect – I think the writing is great, particularly as it goes over a long-running series, and especially as it went to ret-con the 3rd movie (Tokyo Drift) properly into the “new” timeline. There was far more careful thought put into making Tokyo Drift fit into this “disposable” series than George Lucas gave to making the “first” three Star Wars movies make sense with the originals.

So, I was a little disappointed with The Fate of the Furious, because, for the first time, the writing let me down a bit.

The set-up: King of the Street Racers and all around Dude For Whom Family Is Number One, Dom Toretto (Vin Diesel) and Letty (Michelle Rodriguez) are on their honeymoon in Cuba. A car race happens, then Dom is made an offer he can’t refuse by Cipher (Charlize Theron). Shortly thereafter, Special Badass Luke Hobbs (Dwayne Johnson) is given a special assignment and he calls in all of those left of The Team to help out. Dom betrays the Family, and now they’re after him, while trying to stop Cipher from destroying the world. Literally.

If you haven’t seen these movies, then what you just read was so much gibberish. If you have seen them, however, you’re asking yourself the giant question, the only question, which is this: WHAT would force Dom to betray the Family?

You’ve probably got a good guess. And, if it’s a really obvious, everyone does that one guess, then, sadly, you’re probably right. I’m trying to avoid spoilers, but basically, think basic, obvious reason, and don’t hope for something more interesting. So, that’s my first big problem with the movie – Dom’s reason was just so “been there, done that” for me. 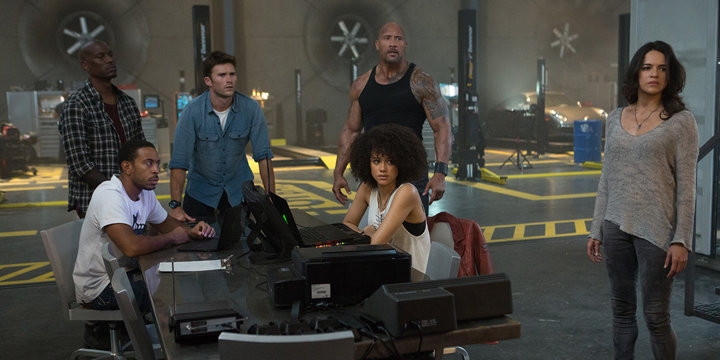 My next issue is that normally these movies give you a setup of what’s gone on before. Furious 7 sure did, expertly. But this one, the 8th movie in this franchise? They do nothing to catch you up. It’s great in that you’re dropped right into some action. It’s not great in that if you haven’t watched all the prior movies just before stepping into the theater, you will have no idea of what’s going on, who’s who, or how in the world the plot actually worked.

I didn’t re-watch Furious 7 before going to see this, and I spent the entire movie thinking there were gigantic plot holes in the script. There actually aren’t, but by not telling us what happened prior, any new viewer or anyone who didn’t bother to memorize all the intricacies of this series will be lost.

Then we have the character of Declan Shaw (Jason Statham) who’s brought in to help the team since they’re out Dom and have also lost Brian and Mia (see Furious 7) and have also lost others along the way. Oh, wait, excuse me. They have changed his name for this movie. He is now Deckard. (Excuse me, what the hell? Really?) Mr. Nobody (Kurt Russell) insists Deckard is needed, but the team is angry with him because he murdered Han and tried to kill all of them.

At least, the team is miffed at him. Most of them ignore him being around and act as if that’s just fine. Hobbs doesn’t want him around UNTIL he discovers that, somehow, Deckard was a hero at some point in time, and then, instantly, they’re buddies. How buddy are they? No one ever mentions that Deckard killed Han (possibly because Shaw killed Han, but whatever). He’s just “in” the Family now.

Lastly, this franchise normally treats its female characters well. But what happens to a key female character who is a part of Dom’s “reason” is bothersome in a variety of ways. It’s impossible to complain about it in a non-spoiler review, but pretty much they took a three-dimensional character with agency and turned her into a prop, and it’s something constantly done to death, and it’s lazy. It’ll be obvious once you see the movie.

And you should see the movie if this franchise is your catnip, if you like action movies, if you want to see diversity on the screen, if you love any of the stars, if you want to watch insane car chases, if you want to see an awesome martial arts display inside an airplane, and more. The movie is still fun, and you still care about the characters. And Scott Eastwood, as Little Nobody, looks to be able to do a fine job of filling the shoes of the late Paul Walker.

If you’re a longtime fan of the series, there are several very nice bits and lines that will remind you why you watch. The stunts are beyond amazing, and, barring my complaints, the rest of the script held up well. This is definitely not my favorite entry in the series, but it shouldn’t cause the series to slow down, either. Here’s hoping they fix what I hated in Furious 9, but even if they don’t, I’m sure I’ll be along for the ride.

Now that Dom and Letty are on their honeymoon and Brian and Mia have retired from the game—and the rest of the crew has been exonerated—the globetrotting team has found a semblance of a normal life. But when a mysterious woman (Oscar® winner Charlize Theron) seduces Dom into the world of crime he can’t seem to escape and a betrayal of those closest to him, they will face trials that will test them as never before.

From the shores of Cuba and the streets of New York City to the icy plains off the arctic Barents Sea, our elite force will crisscross the globe to stop an anarchist from unleashing chaos on the world’s stage…and to bring home the man who made them a family.

The Fate of the Furious

If you’re a longtime fan of the series, there are several very nice bits and lines that will remind you why you watch. The stunts are beyond amazing, and, barring my complaints, the rest of the script held up well. This is definitely not my favorite entry in the series, but it shouldn’t cause the series to slow down, either.