If the audience reaction to the final fight sequence is any indication, “Creed II” is sure to be another successful entry in the “Rocky” series of films. The film, however, is more flawed than its predecessor.

The original “Creed,” directed by Ryan Coogler (the powerful “Fruitvale Station” and “Black Panther”), was as much focused on relationships as it was on the boxing. Written by Coogler and Ryan Covington, the surprise of that film was the understated and vulnerable portrayal of the aging, ill Rocky Balboa by Sylvester Stallone, who rightfully received an Oscar nomination for his performance.

Equally solid in the first film were the performances by Michael B. Jordan as Adonis “Donnie” Johnson Creed, the illegitimate son of Rocky’s opponent Apollo Creed, and Tessa Thompson as Donnie’s love interest Bianca, an aspiring musician who is slowly losing her hearing. Their bonding as the film goes on is skillfully written and portrayed by the actors.

Donnie and Rocky have a troubled but ultimately touching and moving friendship. The entire movie was so well done that the final boxing scene, while artfully produced, almost seemed anti-climactic.

In “Creed II,” Donnie becomes the world heavyweight champion. He proposes to Bianca, who accepts. To further Bianca’s recording career, they move to Los Angeles. Soon they discover that they are going to have a child. They are concerned about the possibility of her being born without hearing but persevere.

Meanwhile in Kiev, Ukraine, Ivan Drago (Dolph Lundgren) seems to be on hard times living in a dump of an apartment. He is training his son Viktor (Florian “Big Nasty” Munteanu) to be a boxer. A huge, well-muscled man, Viktor is shown easily disposing of his competition in local bouts.

A promoter, Buddy Marcelle (Russell Hornsby), hooks up with the Dragos. They show up in Philadelphia to challenge world champion Donnie to a match.

For those not familiar with the Rockyverse, Ivan Drago killed Donnie’s father Apollo Creed (Carl Weathers) in a boxing match and showed no remorse at doing so. For Donnie, this potential rematch of sons creates a visceral need to participate. Rocky tries to discourage Donnie. He then refuses to train Donnie because Rocky blames himself for not throwing in the towel on Apollo when he could have in the fight with Ivan.

In the ensuing boxing match, Donnie appears to be outmatched by Viktor and takes a severe beating. Finally, he is knocked to the canvas by Viktor after an illegal punch. Viktor is disqualified for this action. Donnie ends up hospitalized and demoralized.

He then is pressed by Viktor for a rematch to decide the heavyweight championship. Rocky agrees to train Donnie for a rematch, convinced that he is now fighting for the right reasons, and not out of hot-headedness. The rematch is on, albeit in Moscow. 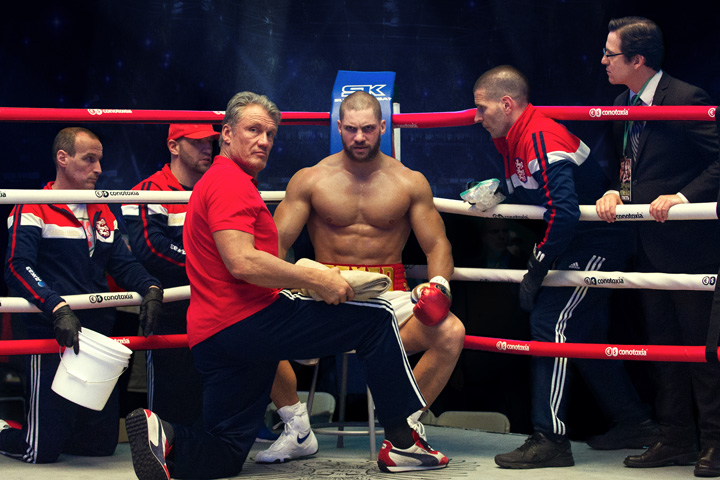 The main flaw with the film is the depiction of the relationship between Ivan and Viktor. While the rest of the people in the movie have interesting and detailed lives, these two are reduced to stick-figure caricatures of human beings. Even when Ivan’s ex-wife Ludmilla (Brigitte Nielsen) appears, we discover nothing about why they broke up or why she abandoned her child. The only thaw in this depiction of the two occurs toward the end of the film and by then it is too little, too late.

Another facet that could have been better explored is Rocky’s falling out with his own son. Rocky has never even seen his grandchild. Though he makes efforts throughout the film to contact them, again it is toward the end of the film that any progress is made. The audience did gasp at the revelation of the actor who played his son, though.

In general, these end-of-movie resolutions indicate a pandering to audiences by the screenwriters. It presumes that people need to have closure to like a film. Further, it saves the screenwriters effort by not having to invest in the characters earlier in the film.

The screenplay this time was written by Stallone and Juel Taylor. It lacks the preciseness of the first script. I will give Stallone credit, though, for not padding his part because his character is very much in the background, even more so than in the first film. He continues to give an understated performance as well but this time not Oscar-worthy.

This being said, there is some fine acting here from the cast. Michael B. Jordan is solid as is Tessa Thompson. Their relationship continues to feel real and authentic. It’s just too bad that the script is not as good as their talents warrant.

The boxing sequences are top-notch. You can feel the body-blows. The slow-motion photography in particular is spectacular. The final match has you on the edge of your seat.

I also enjoyed Bianca’s music and performances. Her entrance singing and accompanied by a light show into the boxing arena ahead of Donnie for the final fight is superb.
So while this film is not as good as the original “Creed,” it has several things to recommend it. This fits perfectly into the formula of this franchise. Steven Caple, Jr., does a good job directing, especially the boxing sequences, but he is no Ryan Coogler. I just hope that next time all of the characters have well-developed lives.

Life has become a balancing act for Adonis Creed. Between personal obligations and training for his next big fight, he is up against the challenge of his life. Facing an opponent with ties to his family’s past only intensifies his impending battle in the ring. Rocky Balboa is there by his side through it all and, together, Rocky and Adonis will confront their shared legacy, question what’s worth fighting for, and discover that nothing’s more important than family. Creed II is about going back to basics to rediscover what made you a champion in the first place, and remembering that, no matter where you go, you can’t escape your history.

If the audience reaction to the final fight sequence is any indication, “Creed II” is sure to be another successful entry in the “Rocky” series of films. The film, however, is more flawed than its predecessor.