True Confession: My daughter was a gigantic Mighty Morphin Power Rangers fan when she was little. Ergo, I’ve seen a lot of the TV show, in its various iterations. And I always thought it was cheesy, campy, fairly stupid, with “monsters” that looked like Sid & Marty Kroft rejects, and plots that were consistently mundane. So, when I heard there was going to be a big budget movie made of this property – a property that’s had at least five iterations that I can think of, and probably more – I wasn’t excited.

Until I saw the trailer.

The trailer set this up as something more, something better than the TV show. So, I asked for the premiere.

Power Rangers opens with a scene set 65 million years in the past, and sets up its science fiction premise – aliens fighting on Earth, one to try to take over all the living worlds, others to prevent that and protect life. Evil is stopped – for a while – but it can rise again and, hopefully, so can some heroes.

We hit present day in the fishing and mining (don’t ask) town of Angel Grove where the big battle took place all those millions of years ago. Five disparate teenagers end up coming together, finding the Power Ranger coins, gaining superpowers, finding the ancient spaceship, and facing off with the big bad. 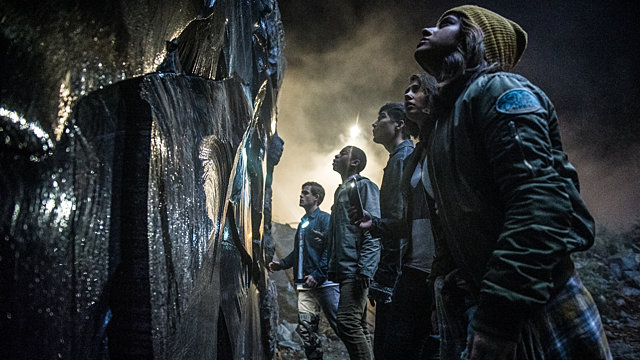 Jason/Red Ranger (Dacre Montgomery) is a football star who’s gotten into trouble and house arrest, for reasons that we’re never clear on but seem to be related to not wanting to be a football star. Billy/Blue Ranger (R.J. Cyler) is autistic, definitely the smartest of the bunch, and becomes friends with Jason when Jason defends him from The Detention Bully. Kimberly/Pink Ranger (Naomi Scott) is a cheerleader who isn’t interested in football players (seemingly), who’s got Mean Girl Troubles, and could be Middle Eastern. Trini/Yellow Ranger (Becky G), aka Crazy Girl, is either lesbian or bisexual (it’s not clear), could be Hispanic, and is extremely disaffected from her family, and is used to being the perineal new girl in town. Zack/Black Ranger (Ludi Lin) is Asian and trying to deal with his mother’s illness and potential death. Bryan Cranston – who has a LONG history with this franchise overall – voices the original Red Ranger, Zordon, and Bill Hader voices the robot, Alpha 5.

Their opponent is Rita Repulsa (Elizabeth Banks), a former Green Ranger, who is after enough gold to create her golden destruction monster, Goldar. She succeeds – but will the teenagers, who haven’t yet managed to morph into their armor, stop her?

Yes, this is an origin story, but it’s a well-done one. Frankly, it’s been a long time since anyone’s cared about the Power Rangers, so an origin story is necessary. The cast is good – the teenagers get their various angsts across without too much exposition, and while some of their bonding is glossed over, you do believe they care about each other and basically feel that the five of them are all each of them really has.

There are a lot of sly and cute shout outs to longtime fans, the product placement is obvious but done in a hilarious way, and the monsters, for the first time, are actually scary. The fight scenes vary between handheld horrible and impossible to see and actually good and fun. The cast is diverse and winning, with each character getting their moments to angst and to shine. The movie eschews the massive camp of the TV shows and prior movies, going for a similar tone as the Transformers movies (look for an Easter Egg related to that, too), while keeping viewers entertained and engaged with the characters. I enjoyed that there was an actual science fiction reason for everything going on, and one that leaves the door open for more adventures. And if you’re going, stay through the credits for a cool teaser.

Power Rangers isn’t going to win any Oscars, other than possibly technical ones, but it’s a fun action movie that works for both original fans and those who have no idea what Morphin Time is.

SABAN’S POWER RANGERS follows five ordinary teens who must become something extraordinary when they learn that their small town of Angel Grove — and the world — is on the verge of being obliterated by an alien threat. Chosen by destiny, our heroes quickly discover they are the only ones who can save the planet. But to do so, they will have to overcome their real-life issues and before it’s too late, band together as the Power Rangers.

Yes, this is an origin story, but it’s a well-done one. Frankly, it’s been a long time since anyone’s cared about the Power Rangers, so an origin story is necessary. The cast is good – the teenagers get their various angsts across without too much exposition, and while some of their bonding is glossed over, you do believe they care about each other and basically feel that the five of them are all each of them really has.