There is a scene in last year’s “Blindspotting” where a character, in dissing M. Night Shyamalan, says “There’s always a twist.” This is definitely the case in the new movie, Glass, directed by Shyamalan.

Glass combines the stories outlined in Shyamalan’s previous films, Unbreakable and Split. Although James McAvoy’s portrayal of multiple personalities in Split was a tour de force, I did not care for the plot. I found the imprisonment of young women on the pretext of impurity and that they had not suffered enough to be pandering, sexist, and tired trope. Unbreakable was fine as a film, if a bit of a letdown after The Sixth Sense. In fact, it is hard to believe that it has been 20 years since The Sixth Sense was released.

The story begins on two parallel fronts. Kevin (James McAvoy) and the other multiple personalities that make up the Horde in his head have again abducted four young women who are being held hostage in even more primitive conditions than in Split. David Dunn (Bruce Willis), who now owns and operates a home security store with his grown son Joseph (Spencer Treat Clark), goes out and rights wrongs committed by the underbelly of Philadelphia society. For those not familiar with Dunn from Unbreakable, he cannot be harmed unless he is in water, which is his weakness.

Dunn hears about the abduction of the girls and discovers their whereabouts. He frees them and then encounters the Beast, the ultimate physical incarnation of the Horde. In the process, both end up getting caught by the police, led by a psychiatrist, Dr. Ellie Staple (Sarah Paulson).

Coincidentally, Elijah Price (Samuel L. Jackson), in a state of heavy sedation, is in the same facility. As a recap, he was the comic-book store owner in Unbreakable who explains to Dunn that he actually is a superhero. Just as Price has very breakable bones, hence his code name “Mr. Glass,” Dunn is his opposite. At the end of that film, Dunn discovers that Price has committed unspeakable crimes and sets about having him incarcerated for life. 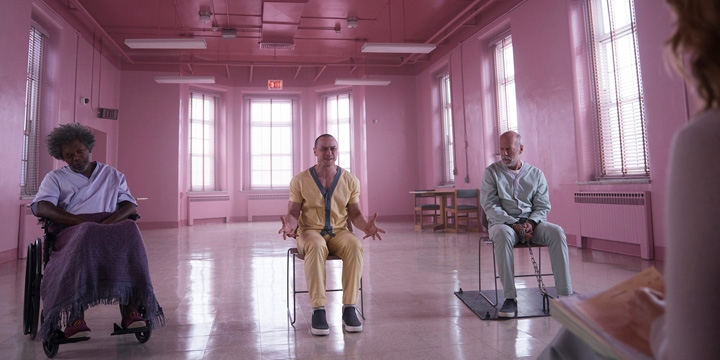 In a weakness in the film, Dr. Staple attempts to convince Kevin and Dunn that they are not superheroes. She explains that this is a particular mental disorder in which they have convinced themselves that they are superheroes in contravention to reality. The fact that the audience knows that the Beast and Dunn truly do possess superhero powers makes her seem utterly clueless or willfully ignorant.

She shows them MRI scans of the brain that indicate that they have a region of the brain that is different from normal people. Unless they recant their belief that they are superheroes, she proposes to operate on their brains. She indeed does perform such a procedure on Price, since in his stupor he does not have the ability to recant his belief.

In other scenes, we see Joseph trying to convince Dr. Staple that she is mistaken about his father, to no avail. Casey Cooke (Anya Taylor-Joy), the surviving abductee from Split, appears because she believes that Kevin, the original core personality of the Horde, is basically a good guy who she cares about deeply. Price’s mother (Charlayne Woodard) speaks to Dr. Staple and her son but does nothing to prevent Dr. Staple’s medical intervention on Price.

From here, events occur that bring the film to its climax and then some. As expected, there are twists, or, if you prefer, unexpected developments. I will not reveal them here, as that should be the option of the moviegoer to witness. Suffice to say, if you like twists, you will not be disappointed here.

Whether or not the twists are believable or satisfying is another matter. Shyamalan strikes me as someone who is very good at delivering big-picture concepts but sometimes fails in the storytelling details. By that, I mean that gaps are left in the screenplay that would flesh out the story. Sometimes there is not enough context for the twists to make sense, rather than seem to be a deus ex machina.

Yet despite all this, it is the sense of wonder at the world we live in that is the strength of Shyamalan. He is willing to postulate “What if?” and take a chance on extrapolating from that question. The results are often mixed, but it makes him a filmmaker worth watching to see if he can catch lightning in a bottle with each new picture.

McAvoy is the only noteworthy acting performance here. Once again his portrayal of multiple personalities is excellent. I particularly enjoyed the physical nuances that he brings to each incarnation of the Horde. As an homage to his effort, each member of the Horde is listed along with his name in the credits.

Bruce Willis as Dunn is basically one-note. He seems wearied all the time and is not in the story all that much. Samuel L. Jackson begins to shine once he comes out of sedation but again has a small dialogue part and relatively brief screen time. Sarah Paulson as Dr. Staple is adequate at best.

The sets in the hospital are quite good. They capture a sense of the austere along with adding high-tech elements such as the surgical theater and the light machine used to control the Horde.

There is some violence so I would not recommend this for young children of any age.
While there were some holes in the plot, I found the intersection of the three main characters to be fascinating. I also enjoyed the final twist as well as some of the other twists in the plot. I did find myself entertained. So I guardedly recommend this film if you are a Shyamalan fan.

M. Night Shyamalan brings together the narratives of two of his standout originals—2000’s Unbreakable, from Touchstone, and 2016’s Split, from Universal—in one explosive, all-new comic-book thriller: Glass.

From Unbreakable, Bruce Willis returns as David Dunn as does Samuel L. Jackson as Elijah Price, known also by his pseudonym Mr. Glass. Joining from Split are James McAvoy, reprising his role as Kevin Wendell Crumb and the multiple identities who reside within, and Anya Taylor-Joy as Casey Cooke, the only captive to survive an encounter with The Beast.

Following the conclusion of Split, Glass finds Dunn pursuing Crumb’s superhuman figure of The Beast in a series of escalating encounters, while the shadowy presence of Price emerges as an orchestrator who holds secrets critical to both men.

As expected, there are twists, or, if you prefer, unexpected developments. Suffice to say, if you like twists, you will not be disappointed here.

Whether or not the twists are believable or satisfying is another matter. Shyamalan strikes me as someone who is very good at delivering big-picture concepts but sometimes fails in the storytelling details.

While there were some holes in the plot, I found the intersection of the three main characters to be fascinating. I also enjoyed the final twist as well as some of the other twists in the plot. I did find myself entertained. So I guardedly recommend this film if you are a Shyamalan fan.