2020 has been a long year for everyone, and that makes the number and variety of revenge films released this year even more interesting. It’s almost as if the Universe were anticipating there’d be a large number of people who’d been cooped up most of the year in need of some sort of vicarious cathartic release… or else partner/spousal murder rates might spike.

Promising Young Woman takes a harsh and brutally honest look at the unresolved trauma that sexual assault can have on a woman, and how insidious the aftermath of indifferent treatment at the hands of law enforcement can be on those victims. In many cases, the demeaning or dismissive treatment they endure at the hands medical and law enforcement professionals have been reported as being worse than the actual attack.

The prospect of never finding justice and having no other recourse can lead someone in pain down a dark, destructive path, and that’s the headspace we find Cassie in when we meet her.

Her friends and parents are worried about her, as she’s seemingly wallowing in a psychologically frozen space, unable to move on beyond a traumatic event from several years before that she’s still trying to process. But they aren’t aware of her secret night life, working out a retribution fantasy or three on the men who behave as if it’s their duty to have sex no matter how vulnerable their prey may be, nor how criminal what they are doing actually is.

Cassie begins to pull herself out of the obsession with her dark mission after she reconnects with a medical school classmate, Ryan. As their relationship grows into a more positive influence in her life, Cassie learns a few more brutal details about what happened the night Cassie’s friend Nina was assaulted, derailing both their lives. The revelations of the betrayals of silence around those who knew what really happened and chose not to get involved or corroborate Nina’s story sets in motion a plan that dominos into the only way Cassie can see to get the justice both she and Nina were denied years before. 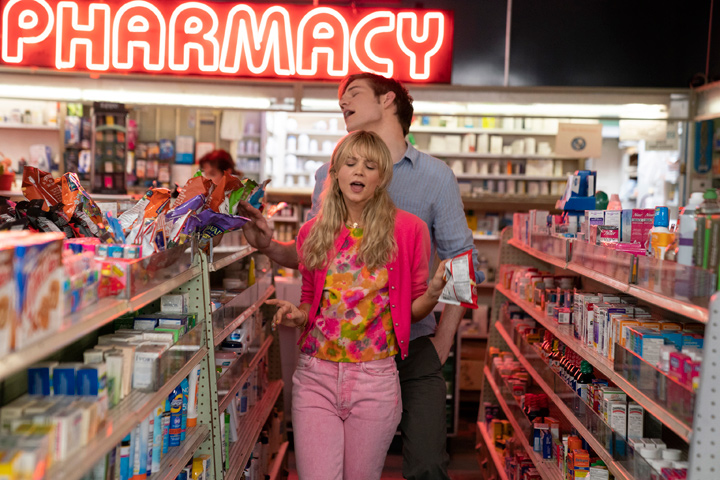 It’s always been a rage-inducing sentiment, the statement how such an accusation can ruin a nice young man’s life, with zero regard for the damage to the life that nice young woman has lost at the hands of that nice young man. Damage that will likely last for her lifetime because keeping her from rebuilding seems to be part of the playbook.

We’ve seen it over and over again, in Hollywood, in sports, and everyone is on board for the rehabilitation of the male attacker’s reputation and career, but no one talks about rebuilding the female victim’s psyche and career. We’ve seen countless examples of how many women had their careers destroyed because they refused permission to have their bodies used or abused at the hands of a man with power over their lives and livelihoods: up and coming starlets who simply disappeared, strong-willed women directors and prospective film or television execs whose careers were derailed, talented women writers who never got a chance to start shining, child actors who broke and fell into addictions, and a million more stories of ruined lives.

Carey Mulligan turns in a powerful, poignant and ultimately shocking performance as the broken but not beaten Cassie, and the progression of her targets from random men who deny they indulge their predatory proclivities to the people directly responsible for Nina’s fate builds the final chapters of her rekindled revenge into a compelling yet bleak pursuit of justice and closure.

Bo Burnham’s Ryan is played as a sympathetic, compassionate guy who truly wants Cassie to regain her previous pursuit of accomplishments of medical genius as well as build a relationship with her that he missed a chance at years before. The earnest charm is meant to encourage sympathy from the viewer after Cassie finds out a few more things about him and his friendship with the men directly responsible for the assault on Nina, and what viewers may feel after learning that are deliberately uncomfortable.

Watching Cassie turn the screws on her former friend Madison, and on the female dean of the med school for their parts in silencing or hiding the truth about what happened that night, is chilling in her execution and delightful in how she draws out their fears and discomfort about how something similar happening to them changes their views. While it might be easy to say that those scenarios were written to play a certain way for dramatic purposes, we’ve seen it play out that exact same way in the news so many times before. We have to look at our society a little more closely when people in authority can’t empathize with a crime victim until the that crime actually happens to them or someone they give a damn about.

If you’re interested in seeing a revenge thriller with a few twists out of the ordinary, this movie is well worth watching, and maybe it’ll make you ask a few questions of your own.

Everyone said Cassie was a promising young woman… until a mysterious event abruptly derailed her future. But nothing in Cassie’s life is what it appears to be: she’s wickedly smart, tantalizingly cunning, and she’s living a secret double life by night. Now, an unexpected encounter is about to give Cassie a chance to right the wrongs of the past.

"Promising Young Woman" and the harsh truths of trauma and justice

Promising Young Woman takes an harsh and brutally honest look at the unresolved trauma that sexual assault can have on a woman, and how insidious the aftermath of indifferent treatment at the hands of law enforcement can be on those victims. In many cases, the demeaning or dismissive treatment they endure at the hands medical and law enforcement professionals have been reported as being worse than the actual attack.