The El Royale may have seen better days, but in this acting showcase, it provides the backdrop for wild, violent action and fascinating character studies.

The titular El Royale is a marvelous creation. A red line leads from the parking lot straight into the lobby. On one side is the state of California, on the other Nevada. So you can gamble on the Nevada side, but not on the California side.

Likewise, there are rooms in either state. In one of these rooms, a man enters in the 1950’s. He systematically takes apart the floor to hide a valise. After this is done, he opens the door to a knock and is gunned down. 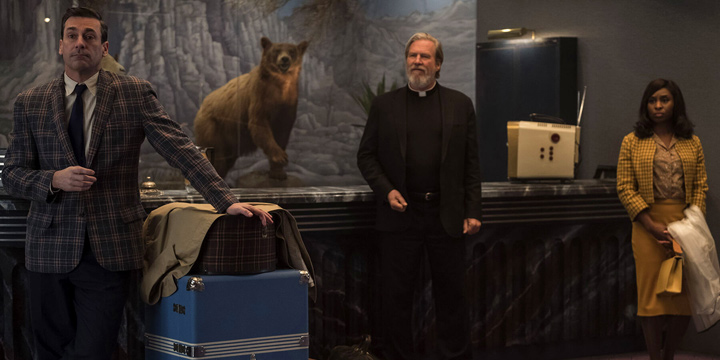 Fast-forward to 1969. Father Daniel Flynn (Jeff Bridges) appears to be confused in the parking lot when Darlene Sweet (Cynthia Erivo) arrives. After he recovers his composure, they meet Laramie Seymour Sullivan (Jon Hamm), a vacuum cleaner salesman. Laramie is effervescent and assertive, and insists on having the honeymoon suite.

He has not been able to summon the clerk, Miles Miller (Lewis Pullman), who finally shows up looking bedraggled. He gives them the spiel about the hotel being on the dividing line between 2 states. As they each get a room and sign the register, Emily Summerspring (Dakota Johnson) arrives. She exudes attitude and has no time for the formalities of Miles.

We soon find out, once each person is in their room, that all is not as it seems. Father Daniel starts taking apart the floor. Laramie removes electronic bugs planted in his room. Darlene starts singing to a metronome. Emily brings a bound girl into her room.
From here, the plot becomes more and more intricate as we discover the backstory of each character. Matters become even more complicated as the secret of the El Royale is revealed. Eventually, Billy Lee (Chris Hemsworth), a Manson-like cult leader, shows up with his minions.

To describe more of the plot would be to ruin it for those who have not seen the film. Suffice it to say that the movie moves along at a compelling pace as each new revelation unfolds.

The use of title cards that divide the film with headings like “Room Five” and “Maintenance Closet” is done effectively and creates new interest as to what surprise awaits. We see events from the perspective of several characters and this adds to the narrative, giving it depth.

The theme of intersection is a primary one. The El Royale lies at the intersection of two states. Each character’s fate starts intersecting with others. The past intersects with the present.

Violence will intersect with each of their lives as well. This film does not stint on shootings and those sensitive to this should take note. At times, the violence and the characters reminded me of the work of Quentin Tarantino. This movie, however, is not as gritty as his films. But it would still be accurate to say that it is an homage to Tarantino. 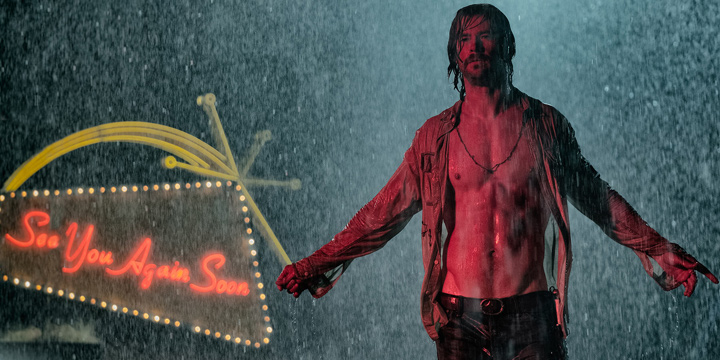 The glitz and kitsch of the lobby are superb. The attention to detail is remarkable in the design of the bar, the jukebox, the seating, the gambling machines, and the Automat-style vending dispensers. This is clearly a place that has seen better days, however, so amidst the glamour lies a patina of disuse. By contrast, the basic rooms are an embodiment of functionality and drabness.

The soundtrack of songs from the 1960s is incredible. It is so integral to the flow and structure of the movie that it is practically another character.

As expected, Jeff Bridges gives another notable performance as Father Daniel, who may or may not be a priest. His character is suffering from the onset of dementia, and he knows that he does not have long to do what he needs to do. He effortlessly evokes the humanity, in all its complicated forms, of his character and the internal decline that he is experiencing.

The real find in this picture is Cynthia Erivo, who won a Tony for “The Color Purple” on Broadway. Her character is a former backup singer determined to forge a new identity in Reno. Every emotion that she shows rings true, and she is able to both convey world-weariness and hope. She also is a great singer.

Lewis Pullman as Miles Miller gives a low-key but perfect performance as the mysterious hotel clerk. The role of Billy Lee could have been over-the-top but is given a subtler touch by Chris Hemsworth.

There are certainly flaws. Given the secret of the El Royale, why the valise is still there after a decade is a mystery. The motel is reputed to have once been a resort for the rich and famous, but aside from the lobby, the plainness of the rooms belies that claim.

The most glaring flaw is the lack of an ending worthy of the rest of the film. It is almost as if director Drew Goddard (the wonderful “Cabin in the Woods”) was running out of film and just decided to patch together a finale.

But this movie is a blast. The music is great, the set is intriguing, the acting is top-notch and the plot twists keep you interested. Four out of five stars.

Seven strangers, each with a secret to bury, meet at Lake Tahoe’s El Royale, a rundown hotel with a dark past. Over the course of one fateful night, everyone will have a last shot at redemption… before everything goes to hell.

WRITTEN AND DIRECTED BY: Drew Goddard

Bad Times at the El Royale

The El Royale may have seen better days, but in this acting showcase, it provides the backdrop for wild, violent action and fascinating character studies.

The most glaring flaw is the lack of an ending worthy of the rest of the film. It is almost as if director Drew Goddard (the wonderful “Cabin in the Woods”) was running out of film and just decided to patch together a finale.

But this movie is a blast. The music is great, the set is intriguing, the acting is top-notch and the plot twists keep you interested.