When it was announced Juan Antonio Bayona would direct the next Jurassic Park movie I was absolutely thrilled. His recent film, A Monster Calls was a philosophical alluring piece of work that critics and audiences loved. It was my hope that Bayona would bring his inspired vision to an otherwise stale dinosaur franchise.

While I enjoyed some aspects of Jurassic World, ultimately it felt like a souped up version of the original Jurassic Park but without the Spielberg magic. The box office returns however painted a different picture as the profits were huge. Apparently, movie goers turn up in droves when Universal releases new Jurassic Park movies.

So, is Jurassic World: Fallen Kingdom a good film? Did the hiring of a visionary director bring life to the franchise? That would be a big no.

Fallen Kingdom adheres to the same template that has been the backbone of the series. For starters, why must we have the obligatory scene of someone agape in awe at the sight of their first dinosaur? Seriously, after all this time, you’d think seeing a dinosaur would be akin to a seeing a lion at the zoo.

The movie picks up years later after the horrific collapse of Jurassic World. The island Isla Nublar and it’s free roaming dinosaurs are facing extinction due to an active volcano that is ready to blow. Following a familiar tone, people around the world debate whether to rescue the dinosaurs or to let them parish. Responding to this crisis is dinosaur rights activist, Claire Dearing (Bryce Dallas Howard) who is attempting to save the dinosaurs from certain death. It’s at this point we’re introduced to billionaire Benjamin Lockwood (James Cromwell) and his suspicious assistant Eli Mills (Rafe Spall) who offer sanctuary for the dinosaurs. Deciding that she has no choice, Claire contacts ex-boyfriend/Raptor trainer Owen Grady (Chris Pratt), to help save the dinosaurs. Adding levity to the situation Owen replies, “What could go wrong?” 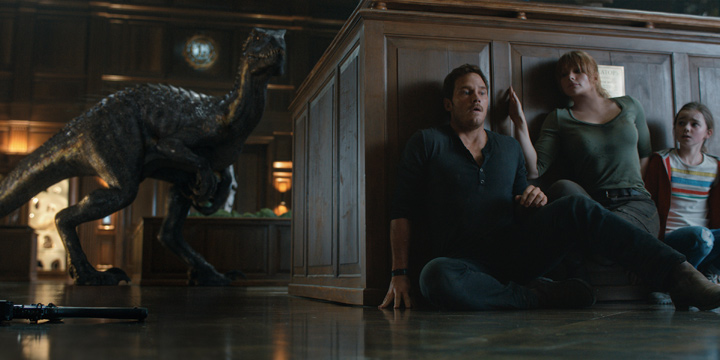 Just like previous Jurassic Park films, Fallen Kingdom pulls from the Spielberg playbook where audience manipulation is key, only this time nothing really works. For example, must we again witness a dinosaur attempt to open a door latch? How many more times do we have to watch this? Scenes meant to evoke fear now feel repetitive and uninspired.

Other than the impressive CGI affects this film is a big snooze fest. I can’t believe this is the same director that produced A Monster Calls and The Orphanage. What happened? Did Universal nix his creative output? Ultimately the Jurassic Park franchise is a money making machine that Universal will undoubtedly milk the heck out. (see Transformers) After all, it’s all about merchandise and ticket sales.

In the end, Fallen Kingdom feels more like an justifiable excuse to capitalize on the marketing potential of the franchise. As they say, to be continued.

It’s been four years since theme park and luxury resort Jurassic World was destroyed by dinosaurs out of containment. Isla Nublar now sits abandoned by humans while the surviving dinosaurs fend for themselves in the jungles.

When the island’s dormant volcano begins roaring to life, Owen (Chris Pratt) and Claire (Bryce Dallas Howard) mount a campaign to rescue the remaining dinosaurs from this extinction-level event. Owen is driven to find Blue, his lead raptor who’s still missing in the wild, and Claire has grown a respect for these creatures she now makes her mission.

Arriving on the unstable island as lava begins raining down, their expedition uncovers a conspiracy that could return our entire planet to a perilous order not seen since prehistoric times.