In a world where the laws of physics have been suspended, Fast and Furious Presents: Hobbs and Shaw showcases its stunning visual effects and stunt work while giving short shrift to its themes in a sometimes preposterous plot.

The “Fast and Furious” franchise is one of my guilty pleasures. From a rather basic start about street racing, its key element has been its showcasing of the strong ties of the Toretto family, both immediate and extended. The untimely death of actor Paul Walker added poignancy as it reflected the vicissitudes that affect every family.

Luke Hobbs (Dwayne Johnson) and Deckard Shaw (Jason Statham) were characters introduced later in the series. They are not integrally connected with the Toretto family although they have been both allies and foes.

The plot of this film essentially revolves around Hobbs and Shaw being delegated by their respective governments to locate a missing virus, Snowflake, that can dissolve people’s insides. It is believed to have been stolen by Shaw’s sister, a MI6 agent, Hattie (Vanessa Kirby), who in fact inserted the capsules containing the virus into her own body. She did so, however, to prevent them from falling into the hands of the cybernetically-enhanced Brixton Lore (Idris Elba). 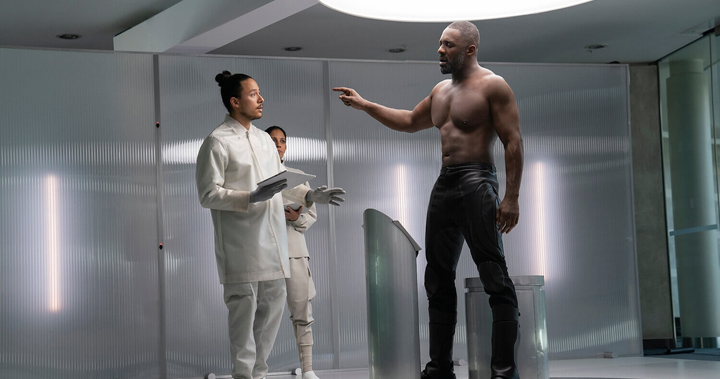 Lore was shot and presumably killed by Shaw. Eteon, a mysterious organization that seems to be run by a disembodied scrambled voice (note to filmmakers: its words are occasionally unrecognizable), “improved” Lore to be the next stage of human evolution (which apparently is all physical advancement and not mental). Eteon wants to use the Snowflake virus to purge the world of weaklings for the betterment of the surviving superhumans.

This is the basic driving force of the movie: who will get the virus and can the world be saved by the latest version of a megalomaniac intent on world domination? Backstories include the family life of Hobbs, who has a sweet, predictably precocious daughter. She is (surprise!) working on a family-tree project but knows virtually nothing of Hobbs’ family on Samoa. It turns out that he is estranged from his brother Jonah (Cliff Curtis, “Fear the Walking Dead” and the resurrected Jesus in “Risen”) and so has not returned.

Shaw also has family issues. He visits his mother (Helen Mirren, criminally underused) in prison. She bemoans his estrangement from his sister Hattie. Conveniently the fate of the world will intervene to allow for a rapprochement between the two.

There are many chases and fights, travels around the world in pursuit of the virus or flights from enemies, and predictable banter between the two leads with Hattie occasionally joining in with a jibe or two. All the action culminates on the island of Samoa (aka Kauai).

There is no doubt that the visual effects are top-notch and completely entertaining. A scene where trucks are trying to hold onto a helicopter on a cliffside road is comparable in majestic scope to the spectacular cargo-plane scene from “Fast and Furious 6.” The high caliber of visual effects has become a trademark of this franchise and this spin-off continues the tradition.

I also want to give a shout-out to the stunt work in the film. The Screen Actors Guild gives an award to Best Stunt Ensemble each year, but this area of movie-making is often overlooked. The stunts are as over-the-top excellent as the visual effects.

The production design is another highlight. From the Chernobyl-esque scene in the Ukraine to Samoa sets, there is a wonder of detail that adds credibility to the locations. The weapons props are superb. Poor production values can often detract from the main story, but this is not the case here.

The family themes do not rise to the quality of those portrayed in the Toretto family. Perhaps it was the grittiness of real-world life that enhanced the realism in the earlier films. Here the family values seem tacked on as an afterthought. They amount to Tarzan-like utterances like “Family good” without fleshing out the individual members, who often amount to stereotypes, of the family to create a reason to believe that fact. The Shaws in particular seem like caricatures instead of a real family.

The eugenics theme (let innocent people live vs. purge the world of the undeserving weak) is repeated ad nauseum. None of these characters are world-class philosophers either so it is often like listening to an argument between drunks at a bar.

I found it more than convenient that whenever the team had to procure weapons and other gear or change their identities, they were able to do so easily. Even on Samoa when they are reduced to traditional weapons, there is a virtual arsenal of such objects. Being an expert in tech and computers seems to be a given.

While I originally bemoaned these as numerous deus ex machinas, I realized that I was seeing the portrayal of characters who are in reality the equivalent of Marvel or DC superheroes. Their foes Brixton and Eteon are the classic supervillains with access to all kinds of mad-scientist technology. Luke Hobbs and Deckard Shaw may be costume-less superheroes, but superheroes they are nonetheless. 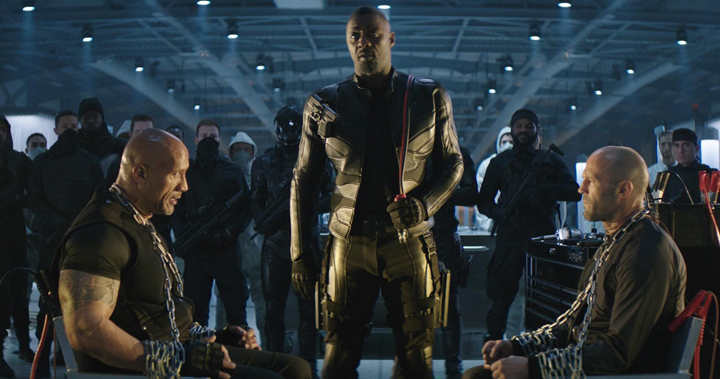 Since this is essentially a superhero fantasy film, it is best not to overanalyze the plot for holes. The most ludicrous may be the fact that while the fate of the entire known world is at stake, the governments are so disinterested that they allow a climactic battle on Samoa using primitive weapons to decide that fate without intervening. Of course the minions all suffer from Stormtrooper Syndrome, as they cannot hit the broad side of a barn with their weapons.

Of the acting, the less said the better. The adjective “workmanlike” comes to mind. The banter between the leads often seems to be forced.

Besides underutilizing Mirren, Idris Elba deserves better material worth his stature as an actor than the lines he is given here. The only positive performance is given by Ryan Reynolds as Hobbs’ alleged overseer. His skill at playing self-effacing roles is well-established thank to the Deadpool series and he continues in humorous style in the brief scenes he has.

So how to evaluate this film? It was very entertaining in places and it dragged in others. As an escapist movie, it succeeds in its objective. It does not rise to the level of the other Fast and Furious entries, but then it seems to have gone in another direction in becoming a real-life superhero fantasy.

Two and a half out of five stars.

Ever since hulking lawman Hobbs (Johnson), a loyal agent of America’s Diplomatic Security Service, and lawless outcast Shaw (Statham), a former British military elite operative, first faced off in 2015’s Furious 7, the duo have swapped smack talk and body blows as they’ve tried to take each other down.

But when cyber-genetically enhanced anarchist Brixton (Idris Elba) gains control of an insidious bio-threat that could alter humanity forever — and bests a brilliant and fearless rogue MI6 agent (The Crown’s Vanessa Kirby), who just happens to be Shaw’s sister — these two sworn enemies will have to partner up to bring down the only guy who might be badder than themselves.

I realized that I was seeing the portrayal of characters who are in reality the equivalent of Marvel or DC superheroes. Their foes Brixton and Eteon are the classic supervillains with access to all kinds of mad-scientist technology. Luke Hobbs and Deckard Shaw may be costume-less superheroes, but superheroes they are nonetheless.

As an escapist movie, it succeeds in its objective. It does not rise to the level of the other Fast and Furious entries, but then it seems to have gone in another direction in becoming a real-life superhero fantasy.