It’s a fast-paced romp through Arthurian myths and legends without regard to well, any of them. But in the age of Hollywood rehashes, reboots, redux and regret that’s not necessarily a bad thing… leave your assumptions and expectations at home and be open to going along for the ride. I laughed more than I expected and was at turns surprised and fully entertained. I left amused and convinced if King Arthur were looking for a (modern) theme song to go along with his unveiling of the “round table” he’d surely pick Drake’s “Started from the Bottom”.

First thing to remember, the subtitle of this movie is the point of this story. Second thing to remember, this is a Guy Ritchie take on the past. Third thing to remember, this is a Guy Ritchie movie. It’s loud, bombastic, occasionally confusing, absolutely in your face, and surprisingly witty. Yes, witty. Ritchie brings his signature round-robin, rapid-fire dialogue styling and quick moving sequencing to Arthurian England. The ensemble is quintessential Ritchie; each rough and tumble crew member best suited to play well off each other and bring life and dimension to a tale that’s been told (to death) through a cinematic lens at least once a decade. His style works for his story direction and gets what it wants from the cast and the story.

Ever wondered how a man raised as a peasant very far removed from the life of a royal, having no royal education or training suddenly rose up to not only take the crown but keep it? Ever wondered what exactly was so special about Excalibur beyond knowing the Lady of the Lake bestowed it upon the Pendragon line (ok that may just be the – classical – English major in me peeking through) descended from Uther? Well, those elements appear to be exactly where Ritchie decided to scribble in the margins of history for his film.

Ritchie’s signature pacing means no drop in the story momentum and a quick-step chronical of passing time and the events making up Arthur Pendragon’s (Charlie Hunnam) formative years in digestible but informative fashion. By the time he’s an adult, you know what motivates Arthur, where his loyalty lies and who the people he’s surrounded himself with are and what they’re about. This directorial choice also, aptly demonstrates how someone so far removed from learning the “noble graces” proved so able to harass a King and win a kingdom without belaboring the movie with data-dumping dialogue. It’s a much closer look at and believable interpretation of the mythical man – even if it in no way falls in line with history.

Shooting on location properly situates this story in time and place without being too cumbersome to the story. The setting is gritty and seemingly a character all its own. This script deliberately focus Arthurian legend on the sword (because seriously it’s a pretty kick ass sword) itself bringing it and the mystery surrounding its importance to the forefront. There are action sequences galore, villains to angst over rooting for because Jude Law and pissed off ensorcelled elephants (yes, I said elephants) to kick things off on a high note. It’s magical realism at its finest set in the medieval age. 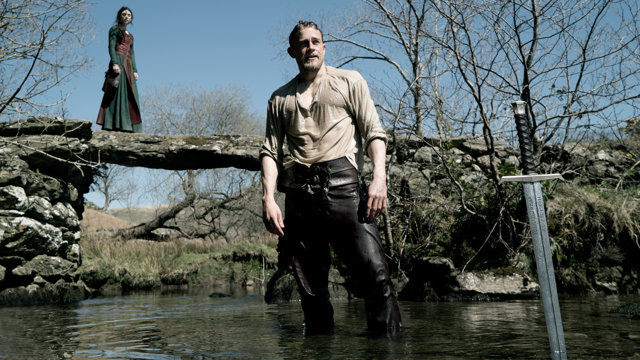 Ritchie’s take creates the opportunity to demonstrate what wielding Excalibur really means. Using CGI and some interesting fight choreography, the audience experiences Uther’s (and later Arthur) point of view as the sword user. You start the film with a clear understanding that Excalibur is more than just a show piece or merely a symbol. Ever wondered what a battle mage looked in action? Well, Ritchie sets out to give you a tangible visual of the sword in action. Having this sword acknowledge you is about more than just being identified as the “born king” of England.

In this reimagining, Jude Law plays Vortigern Pendragon, brother to King Uther. Like all brothers left in the shadow of a badass, he had a case of the bitters. Unlike most brothers, he wasn’t content to whine and whittle away at his brother’s powerbase from the shadows, Vortigern does what any envy-riddled throne coveting minion would; he makes a deal with some seriously nasty tentacle having bitches. Jude Law is an out-and-out bad guy. He’s unconflicted and fully invested in the utter wickedness motivating his character’s actions. He brings another level to this completely factious man intent on ruthless domination at all costs. His character is in no way one dimensional but perhaps a bit over the top.

Some Downside:
• Some of the CGI takes away from the realistic edge (a bit video game-ish) this story’s been given but it’s not distracting enough to pull you too far out of the story. There could’ve been more interaction between male and female characters (no I don’t mean romantically) in order to strengthen the believability of the plotting happening throughout the movie.

• There are some shaky camera moments that are annoying and a few scenes where 3D is remarkably unnecessary. It sometimes caused a frantic feeling that could lead to audience member’s missing something that would later prove important – not enough to disassemble the movie, but if you’re prone to miss things in fast paced movies, then it may be a hindrance to your enjoyment.

• Parts of this tale could’ve been far more compelling with some more fleshing out but the focus on the sword necessitates missing some chances to further explore some aspects of the characters and plot with more depth. Don’t expect an epic; the runtime on this flick is 126 minutes but the story is solid with interesting twist and turns even if not especially high-minded.

• I liked the music selections for the most part but they were occasionally a little too modern to be as tight as fit as some of his Ritchie’s music choices in previous films.

One thing to note: this movie assumes the audience has at least a basic familiarity with the cinematic legend of King Arthur and Excalibur. That being said, Ritchie deliberately carves out a new place – hat tip to the screenwriting trio of Lionel Wigram, Joby Harold, and Guy Ritchie for skipping the “let’s rape Igraine (Arthur’s mother) and treat her like a meaningless pawn” portion of this myth to give their story a jumping off point – in the mythology to start his tale. Uther Pendragon (Eric Bana), wielder of Excalibur, is engaged in battle at Camelot against rogue mage Mordred. Now, those familiar with previous movies may be confused because this presupposes all the battles in which Merlin is present and front and center have already taken place. You’ll see a Mage but it won’t be Merlin. This, to me, is a good thing because it means there isn’t an hour of footage where Uther is running around battling and raging through the country side before shoving that sword in stone. And for the record, that ain’t how the sword ends up encased in rock this time around…

King Arthur: Legend of the Sword is not trying to be epic, it’s not trying to weave a grand myth. It’s telling a story about a (supposed) street kid who worked a wicked hustle and built his own mini-fiefdom only to discover a sword with a greater destiny (for him) in mind and what it takes before he’s willing to embrace it. Don’t expect Arthurian canon to be obeyed, don’t try to guess where it’s going, you’ll be right and wrong all at the same time. As long as you remember the movie is about the sword and all things are in service of that edict this film is a good fun summer movie.

Acclaimed filmmaker Guy Ritchie brings his dynamic style to the epic fantasy action adventure “King Arthur: Legend of the Sword.” Starring Charlie Hunnam in the title role, the film is an iconoclastic take on the classic Excalibur myth, tracing Arthur’s journey from the streets to the throne.

When the child Arthur’s father is murdered, Vortigern (Jude Law), Arthur’s uncle, seizes the crown. Robbed of his birthright and with no idea who he truly is, Arthur comes up the hard way in the back alleys of the city. But once he pulls the sword from the stone, his life is turned upside down and he is forced to acknowledge his true legacy…whether he likes it or not.

It’s a fast-paced romp through Arthurian myths and legends without regard to well, any of them. But in the age of Hollywood rehashes, reboots, redux and regret that’s not necessarily a bad thing… leave your assumptions and expectations at home and be open to going along for the ride.