Solo: a Star Wars Story brings the young Han Solo to screen. While the film has good action sequences, interesting origin stories, and superior acting, it ends up being disappointing because the plot is mired down in a mundane crime caper.

The movie does not begin with the traditional scrolling narrative familiar in past Star Wars films. Instead traditional text informs us that the galaxy is overrun by criminal syndicates.

From there, we are transported to the planet Corellia, where Han (Alden Ehrenreich, so good as a cowboy actor in Hail, Caesar!) has stolen some extremely valuable coaxium to bribe the authorities to let him and his girlfriend Qi’ra (Emilia Clarke of Game of Thrones) escape the planet and the gang that controls him. An extended chase scene ensues. Just as their bribery scheme seems to have paid off, Han is separated from Qi’ra and vows to come back and rescue her. 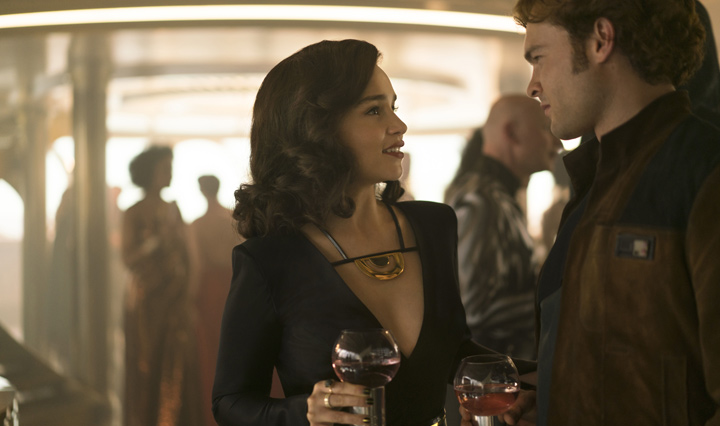 The film now advances three years into the future. Han has joined the Imperial military. While he has learned to operate spacecraft, he is not flying them because of his insubordination. Instead, he is an infantryman mired in a muddy battlefield. Han senses that some of the troops are more than irregular. For his trouble, he is imprisoned in an underground cell where a creature which has not been fed in several days is supposed to eat, or at least, kill him.

That creature turns out to be Chewbacca (Joonas Suotamo), at this time only 190 years old. It was fascinating to hear Han speak Wookiee. They end up establishing a rapport and escaping. In the process, they join up with the irregular troops who are actually a criminal gang.

This gang is led by Beckett (Woody Harrelson), and only has 2 other members. Their plan is to steal a large shipment of coaxium. When this operation fails, they must go meet the person who commissioned the crime.

Thus they end up on a space yacht where they meet Dryden Vos, a villain if ever there was one. Coincidentally, Qi’ra is now his lieutenant. To atone for their botched-up effort, Beckett and his gang, now joined by Qi’ra, must commit an even more dangerous crime to get more coaxium. 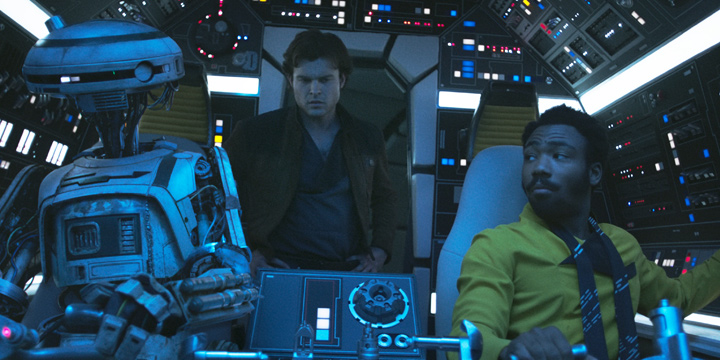 This leads them to a young Lando Calrissian and his Millennium Falcon. Lando and his co-pilot/partner L3-37 (Phoebe Waller-Bridge), a droid, end up joining this enterprise as they head for Kessel.

Most of the film revolves around a brief series of days in Han’s life. They are indeed pivotal days in his life. But the crimes that Han and his allies are involved in, which mostly involve robbing other people of their goods for profit, do not make for an interesting story. On top of that, there are so many double crosses that the movie could be retitled “The Sting in Outer Space,” without the quality of 1973’s Best Picture. The screenwriters essentially hope that viewers will overlook the boring plotline because of their love for the characters.

Another problem involves Han’s promise to rescue Qi’ra as soon as possible. When we next see Han 3 years down the road, he is so resourceful in the few days in which we see him that it seems unbelievable that he could not have returned to Qi’ra in less than 3 years.

This film sorely misses the sense of moral urgency created by the conflict between the Jedi and the Empire. While there is the introduction of a kind of resistance force toward the end of the film, they are a ragtag bunch at best, more on the level of Beckett’s gang. In fact, I may be mistaken, but I do not recall The Force being mentioned at all in this movie.

While we find out some facts about how Han became the Han that we know from Episode IV on, this is not enough to base a film on as the script proves.

Yet, there are several positive things about this film. Ehrenreich is superb as Han Solo. He has the requisite swagger, boyish good looks, recklessness, and chutzpah that defines this character.

The film missed out when it failed to more fully develop the romance between Han and Qi’ra. Ehrenreich’s chemistry with Clarke is very believable, but they are only allowed to show affection for each other in a few scenes. A more developed romance would have given greater insight into Han’s character. In a similar vein, the brief scene where Beckett shows affection to his partner-in-crime Val (Thandie Newton) has wonderful chemistry that is never developed. 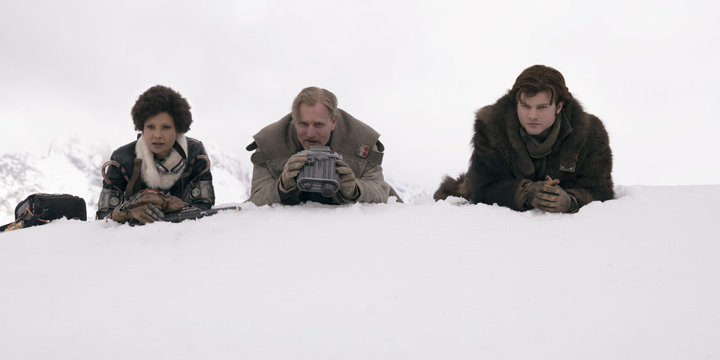 The casting throughout is excellent. In particular, Harrelson, one of the greatest living American actors, IMHO, adds so much to what is basically a one-note character.
A highlight is L3-37. A feisty character, she advocates for droid equality at every opportunity and even leads a refreshing mini-revolt at one point. I appreciated the fact that she wanted to be equal in her own right as a droid, and thus avoided the dread Pinocchio syndrome, where automata want to be human beings. Her complex relationship with Lando is hinted at, but again not developed.

The production values are good throughout the movie. The costumes for the party scene at the yacht and Lando’s outfits, in particular his capes, were very nice.

I could not fault the action sequences, which were well done, if sometimes chaotic. There is a scene involving a train that goes through an incredible range of motions that is wonderful to behold. It is a shame that the film spent so much of its effort on these scenes instead of character development.

Ron Howard inherited this film when the previous directors were let go due to creative differences. Since much of the fault lies with the script, Howard seems to have made the best of a tough situation.

So go to see the Star Wars characters you love. Find out some origin stories about Han and Chewie. Enjoy the special effects and action sequences. Just don’t expect to be blown away by the plot. Han deserves a better effort.

Board the Millennium Falcon and journey to a galaxy far, far away in Solo: A Star Wars Story, an all-new adventure with the most beloved scoundrel in the galaxy. Through a series of daring escapades deep within a dark and dangerous criminal underworld, Han Solo befriends his mighty future copilot Chewbacca and meets the notorious gambler Lando Calrissian, in a journey that will set the course of one of the Star Wars saga’s most unlikely heroes.

Go to see the Star Wars characters you love. Find out some origin stories about Han and Chewie. Enjoy the special effects and action sequences. Just don’t expect to be blown away by the plot. Han deserves a better effort.