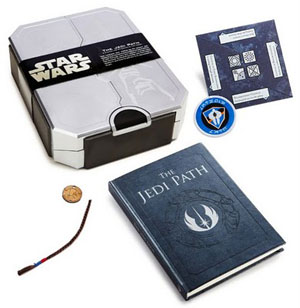 It is highly recommended that you learn the ways of the Force and the history of the Jedi before taking the bold step of loading your lightsaber with 4 D batteries. After reading The Jedi Path: A Manual for Students of the Force, you’ll be knowledgeable enough in the Jedi ways to take on even the fiercest of Rancor monsters.

Part textbook on the history of the Jedi, part ancient Jedi training manual The Jedi Path is the richly imagined addition to the growing canon of Star Wars books by Daniel Wallace. Wallace has written and co-written several valuable books about Star Wars — among them The Complete Star Wars Encyclopedia and Star Wars: The New Essential Guide to Characters — and he is an authority on the subject. Moreover, The Jedi Path comes in a clever mechanical vault that along with the text also includes several Star Wars artifacts.

The clever conceit of The Jedi Path is that this ancient text has been used in the Jedi Academy to teach generations of students the ways of the Force.
And the book is predicated on the idea that all scenes in the Star Wars films that concern Jedi traditions are deliberate, part of a larger tapestry and represent essential steps in becoming a Jedi. For example, when in The Empire Strikes Back Luke, disobeying Yoda, enters a cave in Dagobah and fights an apparition of Darth Vader, that challenge was a necessary and unavoidable test called “Trial of Spirit.”

For those who felt that the introduction of midi-chlorians in The Phantom Menace was an unnecessary scientific explanation of why some are powerful in the Force and others are not, the textbook instructs: “I urge you not to think too much on this necessary biological symbiosis but to instead cast your focus wider. After all, we do not drink the bowl but the soup contained within it.”

George Lucas has said that he didn’t want the precepts behind the Force to be tied to any individual religion. As such, the Force is a bit of a religious mash-up. For example, Jedi Initiates are asked to meditate five times a day, which is an allusion to the Muslim tradition of praying five times a day. Similarly, Jedi-in-training can become apprentices between the ages of 12 and 14, which is a reference to the Jewish tradition of getting Bar Mitzvah’d at 13.

Readers will discover that their copy was once held by Yoda, Dooku (before he was the Count portrayed by Christopher Lee), Obi-Wan Kenobi, Anakin Skywalker, Darth Sidious (the alter ego of Palpatine) and Luke Skywalker himself. All these characters made hand-written notes in the margins of the book that have been preserved and which provide us with a window into their intimate thoughts. As such, there is often a dialogue of sorts between characters in original trilogy and in the prequels. For example, when a younger-than- Ewan McGregor-aged Obi-Wan Kenobi expresses doubt about his relationship with his Jedi mentor, an older-than-Mark Hamill-aged-Luke Skywalker writes next to that note: “Strange to think that Ben was ever like me unsure and questioning his place.”

The characters’ voices and personalities are vividly conveyed in their notations. So, when the “textbook” warns that Jedi Initiates shouldn’t be given a real lightsaber, the brash and impetuous Anakin Skywalker scribbles: “I never used a training saber. I had no problem going straight to a real saber.” It is these thoughts that contain the seeds of his downfall.

As you leaf through the book, memorabilia from the Star Wars universe falls out. I will spoil only one of the surprises: one of the artifacts is the space- coffee-stained napkin that Ben Kenobi used when in an exhilarating moment of inspiration he designed his own lightsaber.

In addition to the fascinating lore — and information-filled text and the other artifacts — The Jedi Path comes secreted in a mechanical metal vault. To gain access to the contents of the vault, one presses a button, and as the book then rises on a platform from the vault it is accompanied by appropriately dramatic sound effects from the Star Wars films that add weight and poignancy to the experience.