“A man of black and white tastes. He loved clear lines, precise architecture and an absence of clutter.” 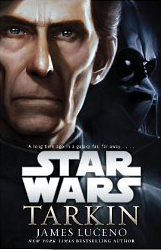 “Star Wars: Tarkin” answers the troubling question of how a young lad born and raised by a prominent family on one of the outer rim planets (Eriadu), places normally reserved as breeding grounds for rebels, thieves, gangster thugs (the Hutts), hijackers and smugglers (Han Solo) could produce a man like Wilhuff Tarkin who would rise to the Empirical rank of Grand Moff. Not only rise in the military but also politically to the point of becoming the most trusted advisor and confidant to the Emperor of the Galactic Empire secondly only in loyalty and stature to that of the Sith Lord Darth Vader.

Beginning in the early days of the construction of the Empire’s infamous Death Star orbiting the Outer Rim planet Geonosis, to its completion and first interstellar flight just shortly before young Jedi Luke Skywalker and his fellow rebel forces destroyed the moon-sized planet killer along with its commander Grand Moff Tarkin; “Star Wars: Tarkin” tells the general’s full biography, filling in the blanks with requisite flashbacks and flash-forwards.

To quote Tarkin himself, “Interesting,” is how I would describe James Luceno’s novel of this well known but little understood icon of Star Wars legend. Luceno allows us to get up close and personal with the life of this Empirical War Lord. To delve into his thoughts, hidden plans, dreams, hopes, successes and failures. To realize that although the maddening and evil heights he reached were stellar, in the end he, like all, was just a man with feet of clay.

The story, particularly its audio version, is told with such minutiae and dedication to detail, even to the subtle description of falling ash from a destroyed human being as a result of Tarkin’s cold military calculation for victory. The reader or listener’s imagination of the reality Luceno paints with words is opened up to its full potential within the Star Wars universe.

Luceno has successfully done with “Star Wars: Tarkin” what George Lucas did in “A New Hope” … return the fan to a place of wonder in worlds anew and offer a fresh view from the dark side that Lucas so miserably failed to reveal in the film versions I through III.

Two-Thumbs-Up to James Luceno for maintaining his record for being one of the bestselling Star Wars veteran authors out there. If you don’t already own “Star Wars: Tarkin,” especially the audio version, then I highly recommend making this a part of your library. It is available from Amazon.com., Audiobooks.com, Barnes and Noble, your local library or anywhere where books and ebooks are sold.