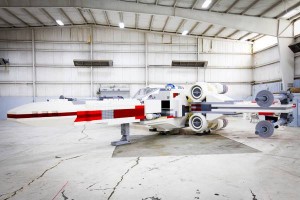 Over the years, we’ve seen a lot of cool genre favorites brought to life using Legos.

Lego has upped the game with the debut of a full-scale model of an X-Wing fighter from Star Wars.

Lego took the specs from the Lego 9493 X-Wing Fighter that you can pick up in stores for around $60.   They just increased them 42 times.

The X-Wing was shipped from Lego’s headquarters in Kladno, Czech Republic to New York City.  It’s currently on display in Times Square and will move cross-country to  Legoland California Resort.

Fans can check out the model and even sit in it.

A gallery of the model’s debut are available HERE.  You can can also check out exclusive up-close photos over at Gizmodo.