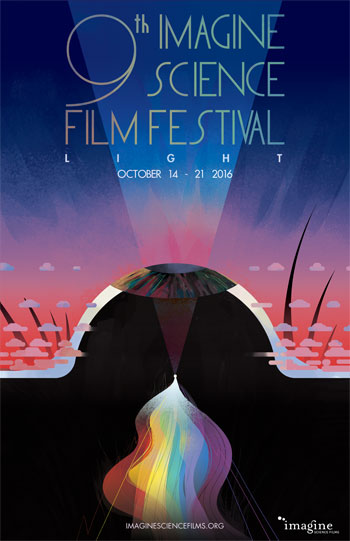 Light through film at 24 frames per second is cinema. Light striking the retina is vision. Sunlight feeding photosynthesis is the foundation of life. Light, then, is always implicitly at the heart of the Festival, but this year it’s the primary subject as well.

The 9th Imagine Science Film Festival will run from October 14-21, 2016, with tickets going on sale on September 21.

The festival kicks off at The Cooper Union and the ambitious schedule includes 21 events with over 83 films, with 23 countries represented. As always, the festival will blend inventive documentaries exploring the latest research findings, with compelling scientific fictions, dazzling imagery, and thought-provoking film experiments. The festival’s theme of light will encompass everything from optics to optogenetics, from the visible spectrum to the all but unseen, with stops along the way for astrophysics, psychology, medicine as well as more penumbral areas of scientific inquiry.

The full festival schedule can be found here: imaginesciencefilms.org/ny-2016-schedule

This year’s festival includes both the Symbiosis Film Competition, in collaboration with the Ligo Project and the Science and Entertainment Exchange, and a science-video scavenger hunt in collaboration with Traces, a new augmented reality app that allows users to save photos and videos to specific locations, and Nanotronics Imaging.
Beginning September 19, users can use the Traces augmented reality app to find short science videos planted at pertinent locations throughout New York City as part of a special “illuminated journey” scavenger hunt. Participants can tweet the special hashtags at the end of each video for a chance to win free tickets to the festival, all leading up to the “Illuminated Journey”.

You can find out more about the Illuminated Journey here, which will explore the very personal nature of light as it reflects the path that light takes from the outside world, through the eye and into the mind, and looks toward the ways technology may come to shape this.

Special videos will be discoverable at each of the venues throughout the week of the festival, and participants that find these and tweet about them will be eligible to win a special prize from Nanotronics at closing night.