Warning: there are harsh opinions and likely some spoilers involved regarding the ending of this film, so proceed accordingly.

This is an intriguing film, with a complex story that upon rewatch reveals extra layers, but definitely isn’t wrapped up at the end with a neat little bow.

The secrecy surrounding the inventor and his projects, the unusual request that only the reporter, Joy, be allowed into the facility every day for a week, and that she cannot bring any electronic devices into the facility at all (limiting her to pad & pen), and the initial progress where Joy and David become closer while he learns to open up more and she rediscovers the excitement that working with robotics used to give her, all add up to compelling story to watch unfold. Adding in the thriller element of the questions surrounding Adam’s emergence and his reaction to this relationship unfolding before him that he has never experienced and can’t understand brings a unique tension to the rest of the movie that complements the story being told. The ending even fits in with the thriller aspect, and the twist adds a new layer and makes you re-evaluate everything else that previously happened in the movie.

But for me, the ending doesn’t hold up as well as the rest of the movie after stopping to think about how it all fits together later. That could also just be me overthinking a few things.

I did enjoy this movie; the cinematography is both expansive and claustrophobic at the same time, making excellent use of the unique space they were in, and the story is compelling and keeps your attention the entire way through by making you question what truly is going on almost every step of the way.

But still, despite the excellent acting and interesting portrayal of technology and humanity becoming several steps closer to merging, there was still something about the story that thoroughly annoyed me… and not being able to put my finger on exactly what it was bothered me for a couple of weeks.

Then during a rewatch of the movie (long after interviewing the director), the off pieces fell together. I don’t think it was a conscious choice by the filmmakers, and I’m fairly certain that me being annoyed by what transpired is just a reaction to a personal hot button, but since it’s an integral part of the story, I feel the need to point it out.

After the week-long “interview” is over, David and his wealthy benefactor seem to think nothing of lying and creating a scandal that discredits Joy as a reporter and ruins her reputation and any possibility of continuing that career, as well as any chance of a future career in robotics, the field she just rediscovered her love for. Having the unwitting investigator or reporter be targeted as someone who needs to be silenced is a well-used trope and not necessarily all that egregious a tactic when used, be the target male or female.

But there was a seemingly throwaway comment earlier in the film, where Joy is asked why she works at all, since she’s independently wealthy from having created a popular and lucrative video game franchise. At first it seems like an innocent question that one would ask to learn more about someone you’re interested in, but given the later developments, it adds an unintentionally sinister undertone to why these people selected Joy… she’s a woman who knows the field, and the true primary goal of the interview was to “experiment” on Joy, with their findings being her seduction and her reactions to having sex (and if one wants to shine a harsh light on what happened, it was her rape because when given under false pretenses, it’s no longer freely given consent).

There is also the implication that this was going to be an intentional quashing of the article through discrediting her, which means the end of her journalism career. But hey, that’s all okay because she’ll still be able to support herself and live a good life, and we needed an expedient way to show how truly evil David’s bosses are. 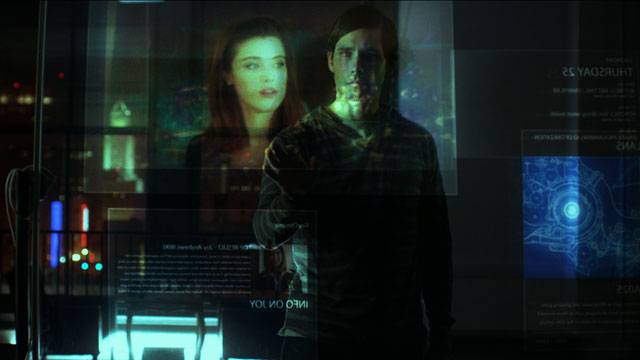 Additionally, learning that she wasn’t the first one subjected to the predatory nature of the seduction and “sexual testing” truly adds a deeply sinister and cruel aspect to the project, and perhaps adds some subtext to why David asked the question about her working when she didn’t have to… was a previous test subject completely ruined with no other options to turn to, and does he feel guilt about that? There are no answers for that, and for me, the only mitigating part of the ending was the seeming impression that David himself is as much a victim of the project as the previous “test subjects”… real people, professionals in the robotics field who were duped, and likely also raped and destroyed by the needs of testing the limits of the project.

Also, Rainn Wilson as the devious billionaire with ulterior “national security” motives plotting to use David’s technology to jump the surveillance state to new levels? Absolutely does not work. Maybe it’s because he plays the same character in everything I’ve ever seen him in, but since he’s only in this movie for a few minutes, it’s not a big deal. Still, suspension of disbelief borders on impossible with his end scene.

Either way, my personal reactions to certain story choices don’t detract from the intriguing nature of the rest of the film, and hasn’t caused me to not want to watch the movie again (which I already have). I don’t hate the ending and I won’t suggest people not watch it; I just question the story choices made there and their implications. The acting performances by David Clayton Rogers and Mark Webber alone are worth the watch.

For more about Uncanny, check out our interview with director Matthew Leutwyler.

For ten years, inventor David Kressen has lived in seclusion with his inventions, including Adam, a robot with incredible lifelike human qualities. When reporter Joy Andrews is given access to their unconventional facility, she is alternately repelled and attracted to the scientist and his creation. But as Adam exhibits emergent behavior of anger and jealousy towards her, she finds herself increasingly entangled in a web of deception where no one’s motives are easily decipherable.

A story about emerging consciousness wrapped as a noir psychological thriller, Uncanny toys with the notions of humanity and emotions while bringing up a handful of other uncomfortable behaviors.