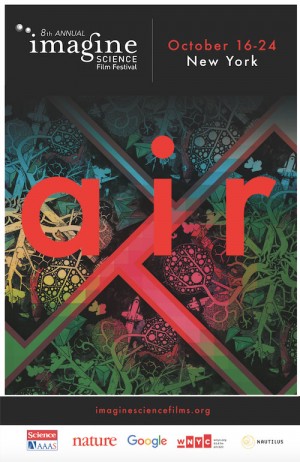 Air. Nitrogen, Oxygen, Argon, Carbon Dioxide. The substance that fills our lungs and fills the skies. The medium through which birds and airplanes glide, not to mention sound waves. Easy to overlook, impossible to live without.

The 8th Annual Imagine Science Film Festival will focus on air in all its forms and meanings: respiration, aeronautics, the elemental composition of the atmosphere, weather, climate, sublimation, gas properties, the mechanics of sound, and all of the mundane and esoteric ways in which air touches everything in and beyond our world.

Each night of the festival moves to a different venue, circulating through the tri-state area with 116 short films and 10 features. We celebrate both scientific merit and visually engaging cinema with awards presented on closing night.

The festival will begin Friday, October 16 with our opening night program, Escape Velocity, at Google NY. Each night of the festival moves to a different venue, circulating through the tri-state area with 116 short films and 10 features, with the closing night, Ambient Science, taking place on Saturday, October 24 at BRIC Arts | Media House.

Tickets are now available, prices ranging from Free to $15. For more ticket information and to view the entire schedule of features and short film showcases and the venues, go to imaginesciencefilms.org/newyork