Doctor Who fans attending San Diego Comic-Con will the among the first to see and buy new exclusive collectibles at the BBC America Booth.

The highly detailed and completely re-engineered working replica of Peter Capaldi’s iconic device will make its exclusive debut at San Diego Comic-Con on July 8, 2015 at the BBC AMERICA shop (booth #4129), before being released by selected retailers later in the summer. Individually laser numbered, the Sonic Screwdrivers sold at Comic-Con will each come with a signed certificate of authenticity, making them an ideal purchase for any collector. The limited edition numbered remote controls will only be available at the BBC AMERICA booth while supplies last. 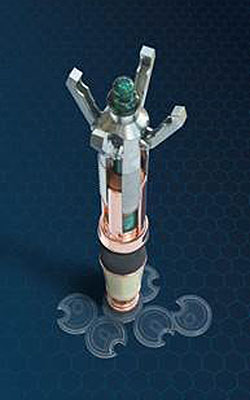 “The keen-eyed Whovian will notice subtle differences between the Sonic Screwdriver favored by the Eleventh Doctor and the one currently used by the Twelfth Doctor. We listened to fans’ requests and have evolved the design to match what’s onscreen, including the fun flick-to-extend feature,” said Chris Barnardo, co-founder of The Wand Company.

The new Sonic Screwdriver has not only been updated to reflect the subtle changes in the Doctor’s coolest gadget, but now extends with a satisfying flick, just like the real thing, and includes a grip-mounted button, press-to-buzz action, and the Wand Company’s powerful Any-TV-Off functionality. The speech-teach feature makes learning the gestures and programming the Sonic Screwdriver easy, and the intuitive gestures allow the user to make like the Doctor and quickly take control of their home entertainment equipment – iPod docks, TVs, DVD and Blu-ray players, in fact, pretty much anything that is controlled by an infrared remote control. The 1:1 scale Sonic Screwdriver can store up to 39 remote control commands, is equipped with 12 authentic Sonic Screwdriver sound effects and a customizable personal lock code, and has 12 secret Morse code phrases from the Twelfth Doctor to decipher. Die cast in hand-polished, copper-plated metal, with a new stand that allows the Sonic Screwdriver to be displayed vertically, this device is not only a serious prop that will delight collectors, but with its host of authentic sonic sounds, it is also a cosplayer’s dream come true.

Making their market debut at San Diego Comic-Con alongside the Twelfth Doctor Sonic Screwdriver Universal Remote Control are snazzy Dalek striped socks and “I am the Doctor” socks depicting the Twelfth Doctor. These items will be available in the BBC AMERICA booth before anywhere else. 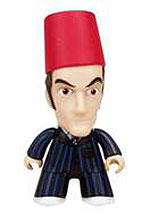 Limited release merchandise for Sherlock and Orphan Black will also be available at the BBC America booth during Comic-Con.

First to Market (available in the booth before anywhere else)