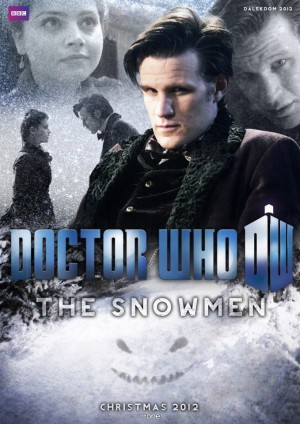 From the start we are introduced to a wintery mystery, one which we can easily see will manifest into your typical global Christmas threat. We are then presented with several interesting situations. First we are given a glimpse of the new companion, Clara (Or is it Oswin? More on this later!). Secondly, we are re-introduced to three associates previously seen in the Doctor Who universe, the Silurian warrior Madame Vastra, her associate (and we now learn is also her wife) Jenny Flint, and the Sontaran warrior Strax. Their roles in Doctor Who have always been unusual, especially for Vastra and Strax as they are from races which have opposed the Doctor, but now are in league with him because of a debt. Lastly we see a rather brooding and possibly bitter Doctor. Here is a man who has lost so much in terms of companions (something which was started during the Russell T. Davies era) and has reached a point where he has finally turned his back on the Universe. Before I go further, I must say that even though the Doctor is a Time Lord, he still has emotions and values that can be found in us mere mortal humans, and for him to finally become embittered due to the constant loss he has personally experienced is something which I finally perfectly plausible.

The threat seemed somewhat generic in nature. What made this story unique were the three situations previously mentioned and how they played and shaped the plot. The three associates of the Doctor do their best to shake him out of his embittered state, and young Clara follows the Doctor because of her curiosity about him. It is because of them, and the Doctor’s depressed state, that we are given an enjoyable episode. In past Christmas episodes we were shown stories where the Doctor did his part to help others in their time of need. Here, through trying to avert a potential wipeout of humanity, the Doctor himself is given the greatest help of all as he finds yet another reason to move forward in life. The threat, on its surface, is uninteresting. I found myself more invested in the relationships of the characters in the story than with the story itself. This is clearly a character driven episode as opposed to being a plot driven one.

Among the interesting elements of this episode were two things in particular. First we have new opening credits. This may seem trivial to some, but to this fan of Doctor Who from years past I found it quite refreshing as it hearkened back to bygone days of old Doctor Who intros. The other new element is the console room of the TARDIS. When Russell T. Davies brought the series back he gave the TARDIS console room an almost organic look. I can’t help but be reminded of a Stephen Moffatt line where it was posed that the desktop theme of the room had been changed to coral (Who knew that the TARDIS operating system was Windows???). While I had eventually become used to the look, what we are given here is a new console room which reminds us that the TARDIS, while it may have a “soul” in form of the Matrix, is still a machine, and I was thrilled to see a return to this.

Aside from the aforementioned generic nature of the threat, we are given references to the Great Intelligence, and for those who are not familiar, hearkens back to the days of the second Doctor in episodes such as The Abominable Snowmen and The Web Of Fear. How far this plays into upcoming episodes is yet to be seen, which then brings about the big problem given to us, and that is the nature of Clara. Without going into too much detail we are presented with a connection to the character of Oswin who we meet Asylum of the Daleks. There is clearly much more going on than two characters both played by the same actress (Jenna-Louise Coleman). What we are given is a question which threatens to drown out the most dangerous question ever asked, and that is “Doctor Who?” Instead we are presented with a situation which will undoubtedly have Who fans chattering and twittering about for months to come. My biggest concern is that the question regarding who and what is Clara/Oswin will not live up to any answers we may be given. Does she have a connection to the Great Intelligence? Is she someone whose consciousness lives outside of time? We just don’t know, and while I fear that any answers regarding her true identity are bound to disappoint Who fans, the real delight is in the chemistry that Jenna-Louise and Matt Smith have together on screen. She is feisty and intelligent, and appears to have the means to keep the Doctor on his Time Lord toes at all times. Because of this, as well as the re-appearance of the Doctor’s three associates (Vastra, Jenny, and Strax), I found this to be an enjoyable episode. I don’t know what the future holds in store, but this episode itself was, for me personally, one of the more enjoyable Christmas episodes of the series.