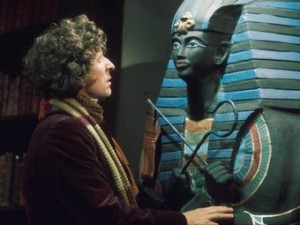 To celebrate the fourth Doctor’s era of Doctor Who, BBC America has chosen the four-part serial “The Pyramids of Mars.”

Starring Tom Baker as the Doctor and Elizabeth Sladen as Sarah Jane Smith, this story comes from what many consider one of the most consistent eras in Doctor Who history.  Producer by Phillip Hinchcliffe and script edited by legendary Who writer Robert Holmes, the four part story features mummies and an ancient Egyptian god bent on escaping and unleashing his vengeance upon the universe.

In short, it’s about as close to perfect as a classic Who serial can get.

Before the serial begins, we’ll get a look back at the seven year of the fourth Doctor with interviews with Tom Baker, Louise Jameson (who played Leela) and current producer Steven Moffat.