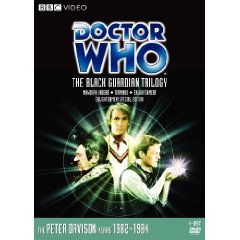 One of the best classic “Who” releases of the year.

For the 20th season of “Doctor Who,” producer John Nathan Turner wanted each storyline to  feature a callback to the past of the show, whether it be a returning villain or monster or a familiar face or two coming back across the Doctor’s path.  In addition, Nathan-Turner wanted a new face to join the TARDIS crew–a school boy with a mysterious past and possibly an alien heritage.

Those two elements led to the creation of a three-story arc during the twentieth season, loosely referred to as The Black Guardian trilogy.   The overarching theme saw the Black Guardian seeking revenge on the Doctor for denying the Guardian the Key to Time at the end of season 17.  Out for vengeance, the Guardian procured the services of an English school boy named Turlough, who in exchange for killing the Doctor would be suitably rewarded.

Released on DVD for the first time, this loosely connected arc of stories makes up the latest box set of classic “Doctor Who.”

The first story, “Mawdryn Undead” sets up the Turlough storyline in the midst of one of the more insightful looks at time travel and its implications the classic series ever did.  Multiple time zones play a factor as do the intersecting time lines of returning favorite Brigadier Alastair Gordon Lethbridge-Stewart.  Visually stunning (even without the CG updates) and featuring a catchy and driving musical score, “Mawdryn” is the highlight of the set and may be the best story from the twentieth anniversary season.

Next up comes “Doctor Who” wrestling with the creation of the universe and saving us from the next big bang with “Terminus.”   Much derided by some of the “Who” community, the story is probably best remembered for companion Nyssa living the TARDIS crew and, in episode two, shedding her skirt.  It’s a shame that the story is probably only remembered for these moment and not for some of the more interesting ideas its trying to put forward on screen.  Unfortunately, the story is let down by a the famous “Doctor Who” cliche of running around a lot of corridors and a ton of technobabble.  It’s also the story that feels the most forced into the trilogy concept once the first episode is complete (Turlough sabotages the TARDIS to get the TARDIS crew to the station).

Finally there’s “Enlightenment” which is one of the most unique stories from the classic run.   The TARDIS comes aboard a racing ship in space where immortal beings called the Eternals are racing for the ultimate prize–enlightenment.   The story has a lot of nuances to it and it’s easy to see why it’s a fan favorite from the season.   It’s got a lot to offer from the ideas of the Eternals who exist as almost vampires on the emotions of the human crew to the superb direction on the serial itself.

It’s also interesting that on the new set that this story is the one that gets the biggest extra treatment–namely in the form of a new director’s cut.  On several recent commentaries, various participants have wondered if classic “Who” could work under the guidelines of new “Who.”  The most obvious point being–could you tell a classic “Who” story in the 45 minute time slot?

“Enlightenment” decides to try and answer that question with a new edit that was supposed to be under an hour but ends up being a bit longer.  It’s probably due to the complexity of having to set up some things for the final leg of the trilogy, but it could also be that the story is a rich one that fully utilizes the screen time across four episodes.  Whatever the case, the new shorter edit is a fascinating experiment and it looks and sounds great (they pull out all the stops with new CGI of the space race).  And while it’s good, it may not be something classic “Who” fans return to time and again along the lines of the extended cuts of “Battlefield” and “Curse of Fenric” we got as extras on those releases.

As for the rest of the extras, they’re up to the usual standard of that the “Doctor Who” restoration team is known for.  The biggest is the new CGI effects for all three stories.  Since the team began tackling these for certain stories and projects with “Ark in Space” years ago, the quality has risen with each release and what we see here is no exception.  The new effects and exterior shots on “Mawdryn Undead” alone are worth a look and may be the new way that some classic “Who” fans watch the stories from now on.

There’s also commentaries on each episode, anchored by Peter Davison and Mark Strickson.  It’s interesting to hear the two discuss the character of Turlough and the limitations placed on him early by having him being opposed to and trying to kill the Doctor.  The two, along with script editor Eric Saward, agree that having a companion whose chief goal is the death of the Doctor limits how you can use the companion–either he’s failing or locked in a room away from the main action.  As always with stories from this era, I wish that producer John Nathan-Turner was around to offer some counter-point and his motivtions for decisions made during his tenure.

The set also includes a documentary on each story, though a lot of the anecdotes tended to crossover from the commentaries.  But if you’re a classic “Who” fan, it won’t take away from the enjoyment of any of these extras.

Were it not for “The War Games” release during the same month, this latest set would be in the running for one of the best classic “Who” releases of the year.  And it’s still a good one with two solid stories, one a bit dodgy one and a wealth of great special features.  What else could a classic series “Who” fan want?