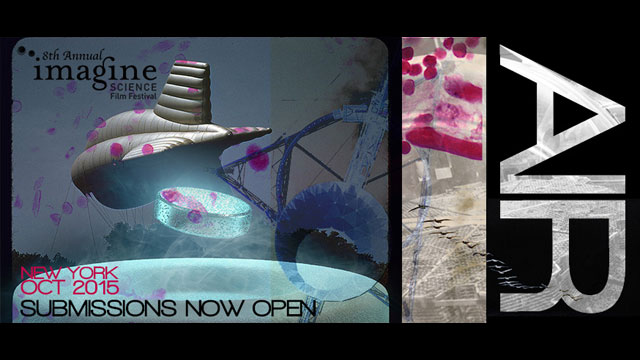 The 8th Imagine Science Film Festival will take place October 16-24, 2015, at locations all over New York City! The festival theme is “Air”:

Oxygen, Nitrogen, Carbon Dioxide. The medium of flight and sound waves. The atmosphere that surrounds us, and the gas that fills our lungs with every breath. Air is a part of our lives in so many ways that we scarcely notice it. And so this year we’re going to explore it in-depth, in all of its scientific facets!

Of course, they are also accepting films on the full spectrum of other scientific subjects, as always, in the categories of “Shorts”, “Documentaries”, and “Features”.

Each year, the festival circulates through a variety of venues, including theaters, museums, and universities throughout New York, Brooklyn, and Queens. Past venues included The Museum of the Moving Image, New School, the New York Academy of the Sciences, Anthology Film Archive, Google NY, the Bell House, Spectacle Theater, Rockefeller University, and the Made in NY Media Center.

Festival submissions are now open, with earlybird submissions running until the end of April! So send in your astounding and inventive documentaries, your scientifically-grounded and thought-provoking science fictions, your gorgeous data visualizations, and your genre-crossing science films that combine all of these and more.