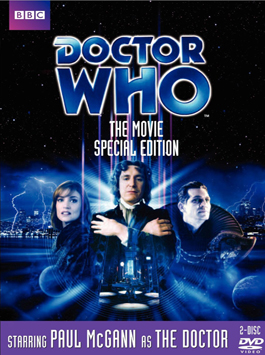 It has been nearly 20 years since Doctor Who the Movie went into production. Pre-production began in 1994 and it aired on American television May 14, 1996. Directed by Geoffrey Sax, it was shown two weeks later in the UK on BBC.

It starred Paul McGann (Luther) as the Eighth Doctor with Eric Roberts portraying the Doctor’s most formidable enemy The Master. The main cast was rounded out with Daphne Ashbrook and Yee Jee Tso as the pseudo companions. This would be the only TV outing with McGann as the famous Time Lord, except for that brief regeneration scene in the 2013 episode “The Night of the Doctor” in which McGann regenerates into John Hurt’s The War Doctor.

After nearly two decades how does Doctor Who The Movie hold up? Fairly well actually. When it debuted in 1996 the film was proceeded by all the required hype, pomp and celebration, however, Fox in its arrogance decided to put it up against the big series finale of the highly popular “Roseanne” sitcom and the American ratings for the film were dismal. The movie had been touted by Fox to be a cross between “Star Trek” and “The X-Files” with the film to be a backdoor pilot for a future Americanized series. After the poor showing the network backed out and Doctor Who continued its infamous Wilderness Period for another decade.

The ratings for the movie in the UK were excellent and it was well received by the public, however, the press in the UK and US didn’t care for it at all. Following Fox’s lead the BBC also backed off since the production was mainly be driven by American dollars.

The movie had a lot for fans of Doctor Who to love about it. The Seventh Doctor (Sylvester McCoy) opened the movie and finally got his regeneration sequence into the Eighth Time Lord. There were plenty of homages to past incarnations of the long running series including tons of Easter Eggs from the first frame to the last. For fans of the show the movie was a nice respite from the viewing malnutrition nearly 10 years of no Who had foisted upon them.

As much as it was loved there was also plenty in the movie for fans and skeptics to dislike about it. Since this was mainly an American production, even though the Doctor continued with a British actor, the rhythm of the film was a bit off and the chemistry between McGann and the characters portrayed by Ashbrook and Tso weren’t fleshed out as much as many had hoped. However, it is likely that would have been resolved had the pilot movie gone to series.

There was also one little part in the film that should have never been allowed to surface. It was only given briefly as an aside but had it lingered it would have changed how we see the Doctor for generations to come. I’m not going to say what it was but since it was in a BBC sanctioned movie it is now canon. Fortunately for us all future showrunners Russell T. Davies and Steven Moffat have totally ignored it and we can only hope it doesn’t rear its ugly head again.

The special effects for this film were heads above anything seen in prior Doctor Who episodes. The TARDIS was phenomenal and for the first time since or after fans were treated to just how infinitely massive the Doctor’s police box actually is.

Eric Roberts played The Master just how he should have been — wild, cunning, scary as hell and very much over-the-top.

While this movie was the only on screen stint for McGann as The Doctor when the film wrapped he wasn’t through with the iconic hero. An entire series of Doctor Who comics, books and Audio Episodes was dedicated to the Eighth Doctor with McGann giving voice and characterization to the role.

Looking back I am grateful Fox lost interest and didn’t follow through with a series. While it may have proved interesting to watch for a while, I believe that had Who moved to America it would have lost its very heart and soul and the most endearing thing it possesses — it’s thoroughly British mindset and worldview. There is something special in how the creativity of the English mind works that is quite appealing as has been proven time and again by the worldwide popularity of its programming and especially comedic timing.

The future of Doctor Who looked very dim after this movie failed to gain an adequate audience back in the 1990’s, however, look at what it spawned in the 21st Century. Thanks in no small part to this film Doctor Who has moved from a relatively obscure British phenomena to a mammoth epic experience that continues to touch the lives of countless millions across the globe.