There are few times in the history of “Doctor Who” that the show gets a look and atmosphere as superbly right as in “The Brain of Morbius.” 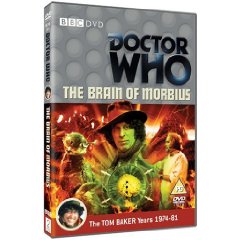 Released just in time for Halloween in the United States, “The Brain of Morbius” is a dark, creepy and atmospheric classic “Doctor Who” serial, made during a time when the show was at a creative zenith under the guidance of producer Phillip Hinchcliffe, script editor Robert Holmes and leading actor Tom Baker. Many fans consider this era to be a “golden age” of “Doctor Who” and looking at “Morbius” it’s easy to see why.

Sent against his will to the planet Sarn, the Doctor discovers an evil genius named Solon is working to resurrect the Time Lord insurgent Morbius. Morbius led a revolt that caused galaxy-wide havoc and was resolved when the Time Lords joined forces with the Sisterhood of Karn (who hold the secret to near immortality). Now with the aid of his servant, Condo, Solon is working to bring Morbius back from beyond the grave to once again create terror throughout the galaxy.

Heavily re-written by script editor Robert Holmes, “The Brain of Morbius” comes from the Gothic period of “Doctor Who” where scripts didn’t necessarily try to re-invent the wheel so much as pay homage to successful horror and sci-fi conventions from the past. In the case of “Morbius” the script borrows heavily from other popular adapations of the “Frankenstein” story with a mad scientists, a hunchbacked assistant and a monster comprised of various body parts stalking the sets. But “Morbius” isn’t just a “Frankeinstein” light story thanks to some superb work by director Christopher Barry and Holmes’ usual penchant for giving old legends a unique “Doctor Who” twist. In this case, it’s the connection to the Time Lords and the character of Morbius, who despite spending three episodes as a brain in a jar, still conveys menace through the vocal performance of Michael Spice.

And say what you will about the wobbly sets, but there are few times in the history of “Doctor Who” that they get a look and atmosphere as superbly right as they do in “Brain of Morbius.”

That’s not to say that it’s perfect. Anytime the aforementioned Morbius is on-screen or Philip Madoc as Solon or Colin Fay as Condo, the story hums along. However, a sideplot about the Sisterhood of Karn and various chases up and down a mountain from Solon’s hideout to the Sisterhood’s lair do tend to bring the storyline to a halt a times. The Sisterhood plotline has potential and there are moments it works, but there are also times it feels added on. You may find yourself wanting to skip past those moments to get back to the horror going on up at Solon’s hideout.

And then, there’s the controversy about “Morbius,” not only in what we see on-screen but also off-screen. On-screen, the story features one of the most debated sequences in all of “Doctor Who” with Morbius and the Doctor engaging in a mind-battle at the end. A lot of electrons have been used over the year debating just who the other faces used in this sequence are–are they the Doctor or are they Morbius?

And that doesn’t even begin to cover the off-screen controversy the program was getting at this time. The dark, creepy and violent nature of the story set off “Doctor Who” critic Mary Whitehouse, giving her more fire for her crusade against the show. The debate would reach a zenith with “The Deadly Assassin,” but there are definitely some sequences in “Morbius” that added fuel to the fire. Luckily for modern fans who may just be discovering “Morbius” on DVD, the documentary on the making of “Brain of Morbius” delves into this at some length (though not as much as I expect they will once “Deadly Assassin” comes out on DVD).

The documentary is the centerpiece of several extras on this DVD release. The documentary includes looking at how Holmes re-wrote the story from an orginal outline by Terrance Dicks and reflections from cast members on their time working on the serial. Also included is a short interview with production designer Barry Newbery creating the visual look for the show and a short 3-D rendering of how the sets were set up and created for filming. Both are essential viewing to understand just how this story came to life visually.

As always with any “Who” release fans are treated to a lively commentary by actors Tom Baker and Elisabeth Sladen, producer Phillip Hinchcliffe and director Christopher Barry and the alwys informative text-commentary track. It’s probably best to listen to the commentary and read the text-commentary track at the same time. There is a tendency for the two to repeat each other, but it’s always worth finding out more about the production of a classic “Doctor Who” serial.

And that doesn’t even begin to cover the usual great work done by the restoration team in presenting “Morbius” on DVD. The picture and sound are superb and fans will want to pick this one up to see the most complete version of the story since its original broadcast (some of the master tapes used for distribution until now had audio problems).

Purchase “Doctor Who: The Brain of Morbius” on DVD