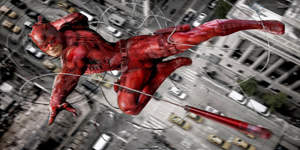 Netflix is joining forces with Marvel to bring a very ambitious retelling of one of its classic characters – Daredevil.

“I’ve been working very, very closely with the entire team on all levels of the show,” stated Quesada in a interview with Comic Book Resources (CBR), “I think everybody knows my relationship with the character of Daredevil, and how important the character is to me — not just on an emotional front, but on a professional front. How DD brought me back here to Marvel, and how instrumental he was to even me being in this particular position I’m in today. I’m very involved with the show, as well as everything that we’re doing with the Netflix shows. I’m incredibly excited, plus the dark and gritty noir world of DD and the Netflix characters, it’s kind of where I live so it naturally attracts me to begin with.”

Drew Goddard (The Cabin In The Woods) is set to both direct and sit in as head writer for the joint Marvel/Netflix project but Quesada will have final script approval.

The new Daredevil show will initially get a 13-episode arc divided into four separate segments. Quesada hinted it will be done in such a way that fans will be able to binge-watch if they decide to throw a weekend long Daredevil party.

“You know that there are going to be some Marvel fans that when this show premieres, they are going to go on to Netflix, and they are going to sit there for 12 to 13-plus hours, and watch the entire thing all the way through. It’s going to happen. The Netflix model offers us the advantage of being able to construct the show in a manner that is very different than a weekly network TV show.”

Daredevil on Netflix is positioning itself for debut sometime in 2015.