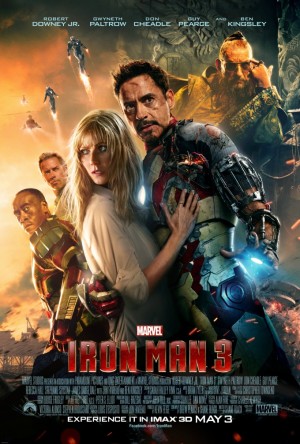 Anyone worried about a post-Avengers letdown can breathe a little easier – at least as far as Iron Man 3 is concerned.  The beginning of Marvel’s phase two of its movie empire begins on a high note with the best-in-the-series entry, Iron Man 3.

Set after the events of The Avengers, Iron Man 3 finds Tony Stark have a difficult time emotionally dealing with the events of last year’s huge hit.   Unable to sleep and obsessed with building an entire fleet of upgraded armors, Tony has isolated himself from the world and his friends.  What brings him back to the world is an attack  by the ruthless terrorist called the Mandarin on United States soil.  The blast puts Happy in the hospital in critical condition.  In a heated moment, Tony calls out the Mandarin on live television, swearing revenge and justice on the terrorist.

It’s one of multiple gripping moments during the course of Iron Man 3’s two hour plus running time.   And it’s one that is superbly played by actor Robert Downey, Jr., once again confirming what most of us have known since the original Iron Man installment – he’s the perfect actor to play Tony Stark and Iron Man.   Of course, it helps that Downey has a strong supporting cast who are all given a moment to shine in the sequel.

It’s also helped by a deft script which finds Tony haunted by his past — both of the Avengers incident in New York and other seeds he’s sewn over the course of his lifetime.  The film starts with events on New Year’s Eve 1999 and then moves forward to the present day where Tony doesn’t realize just how much of his past is coming back to haunt him.

Directed by Shane Black, Iron Man 3 is the follow-up installment the franchise needs to the Avengers and the one that most of us wanted after the original Iron Man.   Black ably takes over the helm from director Jon Favraeu and not only doesn’t miss a beat but casts a huge shadow for follow-up Marvel installments.

Simply put, Iron Man 3 is the best stand-alone Marvel movie yet.   It knocked the original out of my top three of all-time great superhero films and it’s a movie that I’m eager to see a couple of more times before its theatrical run ends.

And if you’re wondering if the movie is worth the extra money for 3-D, it’s a mixed bag.  The 3-D doesn’t really add much to the experience like it did in Avatar or Up.

The film itself is the selling point here. Marvel has done it again, creating one of the best superhero movies of all time and the best movie of the year (so far).

And at this point, I shouldn’t have to tell you to stay through the credits for the post-credits teaser, right?