When I first heard that Marvel was adding Guardians of the Galaxy to their Cinematic Universe lineup, my initial reaction was along the lines of “What the… huh?” Even after I’d recovered a few bruised synapses, I couldn’t figure where they’d go with that. 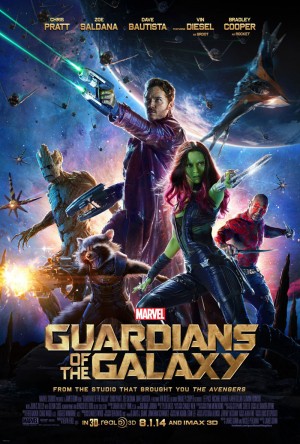 Then I remembered the lawsuit with Fox over the use of Marvel’s mutants. Fox thought they had exclusive rights to everything and everyone who’d ever appeared in any X-Men related title, and Marvel’s opinion was… different. Long story short, Marvel won the lawsuit, Fox got their panties in a bunch, and is likely why we’ll never ever see Professor X or any of his team (past, present or future) in a Marvel-Fox cross-production. Same goes for Fantastic Four and Silver Surfer, alas.

But Marvel’s win meant they get to use Scarlet Witch, Quicksilver, and just as important, the Kree, the Skrull, and who knows, someday maybe even the Shi’ar and the Starjammers (these days, I’m personally not holding out hope for either of those last two because of their closer ties to the X-Men, but ya never know).

So I had always hoped that the Starjammers would be Marvel’s cinematic door to the stars, never expecting the arrival of the Guardians.

Fast forward to 2014. Agents of SHIELD manages to drop a few background teasers that imply they know more about the spacefaring races that anyone else on Earth save visiting Asgardians, and there was that blue-skinned alien hiding in plain sight (hello, Kree!).

Then the first trailers for Guardians of the Galaxy started appearing on Marvel’s YouTube page… despite my initial misgivings, I was hooked, and I knew I needed to see this movie.

This was a fun movie. I don’t think I’ve seen a space opera film that was this much fun since GalaxyQuest. No spoilers here, but I went into this movie not knowing a thing about any of these characters and left wanting to see more, right away thank-you-very-much.

Having the motivations of the main characters be slowly drawn out over the course of the story and watching a this group of ruffians and criminals that no one save die hard comics fans knows a thing about be thrown together and become a believable team is something a lot of other movies could take notes from. I would have liked seeing a little more development behind the civilization of Xandar Prime and more on the Nova Corps and what they do, as a bone for the folks who don’t follow comics, but I think we’ll be seeing more of them.

Seeing The Collector’s collection yielded a few winks to the movie and comics fans, and that meeting, as well as the aftermath of that encounter ties what we’ve seen in The Avengers and Thor: The Dark World together better than having Thanos sitting around being grouchy and bossy.

Thanos needs better minions. You’d think a mad Titan could attract the cream of the crop of henchmen from across the universe, but maybe he’s a tough interviewer.

And while I also think that Peter Quill may have equaled Loki as the snarkiest and most unfiltered mouth in the Marvel universe, Groot steals almost every scene he’s in, especially the first easter egg scene.

Several questions lingered from the opening scenes that were nicely tied in a bow at the end, giving us even more breadcrumbs for future movies — and I honestly can’t wait to see how some of those breadcrumbs might be used in Guardians 2.

There’s also the real possibility of this movie spawning multiple soundtracks, all of which could be contagiously danceable.

The only real downside for me was that they did not show us the post-credits scene at this screening… apparently it had been removed from the worldwide premiere and the press screenings to preserve the surprise for general audiences (same thing happened with the first Iron Man, but for The Winter Soldier both scenes were left intact). Now I have to go see Guardians again just to catch that scene.

I also saw this in RealD 3D, and I’m not sure this movie really needed it. The only places I could tell where there was some depth were battle scenes where action was taking place in both foreground and background, but those were few and far between compared with the rest of the movie. Since I do plan to see the movie again, I may look at the 3D effects little more closely, but in several other 3D movies I’ve seen (Pacific Rim, Deathly Hallows), even the quiet scenes had a subtle depth that was easily perceived and enhanced the viewing. I just didn’t get that here.

Marvel has outdone themselves with this one, simply because they took a little-known group of characters from a short-lived title, and turned them into a pivotal group in the Cinematic Universe and gave us a door to take The Avengers beyond Earth (something the San Diego Comic-Con sneak preview showed would happen in Age of Ultron). Paraphrasing one commenter on a comics news site earlier this year, “Marvel can make a genetically engineered raccoon a movie lead everyone wants to see, and DC still can’t figure out how to do a Wonder Woman movie. What’s wrong with this picture?”

Yes, I’m writing and directing the sequel to #GuardiansoftheGalaxy for theaters July 28 2017. But first go see the first one out next week!

The Marvel Cinematic Universe expands into the cosmos, where brash adventurer Peter Quill finds himself the object of an unrelenting bounty hunt after stealing a mysterious orb coveted by Ronan, a powerful villain with ambitions that threaten the entire universe. To evade the ever-persistent Ronan, Quill is forced into an uneasy truce with a quartet of disparate misfits—Rocket, a gun-toting raccoon, Groot, a tree-like humanoid, the deadly and enigmatic Gamora and the revenge-driven Drax the Destroyer. But when Quill discovers the true power of the orb and the menace it poses to the cosmos, he must do his best to rally his ragtag rivals for a last, desperate stand—with the galaxy’s fate in the balance.