Captain America: The Winter Soldier is the latest in Marvel’s bid to take over the motion picture world and keep the Marvel Universe going strong. Does it work? Let’s find out… 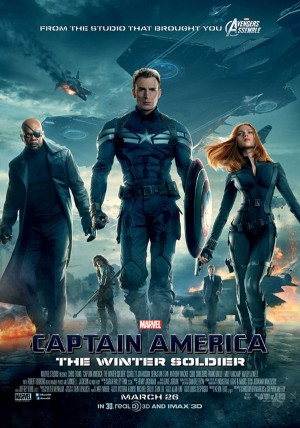 Prerequisite true confession: I adore Chris Evans, Captain America: The First Avenger was my favorite movie of its year of release, and I loved The Avengers just as much. I watched the first Captain America movie, all 3 Iron Man movies, both Thor movies, and the Avengers again, in order of release, to prep for this film. So not only am I comparing it to its predecessor, but to all the movies (other than the Hulk ones, because I recognize no Hulk that is not played by Mark Ruffalo) in this universe. So I went into this film with incredibly high expectations. And…

The film did not, at any time, at any moment, disappoint. This is EXACTLY the Captain America movie it should have been and needed to be. I rarely say this about anything (other than the hubs), but I’m still high and glowing from the orgasms of happiness this movie gave me. Over and over again. Yes, it really was THAT good.

But enough fangirling, let’s get to the relevant conundrum, shall we? Namely, what goes on that I can tell you about without spoiling the movie? Not too much, honestly, because the trailers don’t really tell you what’s going on, which is great.

Something’s fishy at S.H.I.E.L.D. (and not just Agents of) — what were the odds? — and Steve Rogers, aka Captain America (Chris Evans), smells it. There’s a scary assassin out there who looks a teenty-weenty bit familiar. Nick Fury (Samuel L. Jackson) is in serious danger. As are Cap, the Black Widow (Scarlett Johansson), and anyone else who might be on the side of the good guys — if there are good guys anymore. And they are in real, we are all gonna die, danger. As are many others. People you do not expect to die do.

S.H.I.E.L.D. is, first and foremost, a spy agency. Nice touch having Robert Redford, who starred in one of the great spy films, Three Days of the Condor, in this movie as well. Because this is, when you strip it down, a really great spy film.

This movie blends in any and every tiny open plot point from The First Avenger, and answers those plot points in satisfying ways that also open up new questions and plot points. Old friends (Agent Hill! aka Cobie Smulders) and enemies (OMG!), from both The First Avenger and The Avengers are back. New friends (we think/hope) and enemies (oh yeah) are in. Huge MMA/UFC shout out to Georges St-Pierre and Revenge holla for Emily VanCamp for their kick butt roles. Comics geeks should listen for some totally cool name dropping, and look for some familiar “targets”. (Comics geeks will not be surprised by as many things as casual viewers, but there’s a great deal of joy in the appearance of the right character, the correct turning of a phrase, and any other number of tiny details this movie gets right.)

This movie is action-heavy but there’s a ton of character development, little hints of romance (not a lot, really, but what’s there works), some of it very bittersweet, and lots of witty banter. The relationship between Cap and the Widow is not forced to “be” anything it’s not ready (maybe ever, comics lore be damned) to be, thankfully. And Falcon (Anthony Mackie) is, in a word, AWESOME. This isn’t a character I know well from the comics, but Mackie is gorgeous, radiates intelligence, empathy, and courage, has incredible screen presence, and his scenes with Cap have massive Bro Chemistry. I love the character now from seeing this movie one time and I want to see the Falcon, as played by Mackie, in every Marvel movie from here on out. I know that won’t happen, but the only other Marvel movie characters I feel that way about are Wolverine, Cap himself, Iron Man, and now Falcon. (Moved into my Top 5 in one movie — nicely done, sir, nicely done.)

The female characters are well drawn and acted, important to the plot and the other characters. I mention this in part because what I hated about Thor 2: The Dark World was its treatment of Jane Foster. None of the women in this movie are crying into their cereal about anything, other than the fact that they haven’t yet stopped all the bad guys and/or targets.

This is a Marvel movie, and they want to keep you through the credits. Do NOT leave before the very end of the credits roll or you’ll miss something extremely key to both the Captain America series and the Marvelverse as a whole.

Despite being the first super soldier, what Steve Rogers really is, more than almost all of the superheroes out there, is human. Evans continues to get to the pain and decency, as well as the humor and old fashioned, moral belief system, that makes Captain America both an enduring and an endearing hero. After all, when the world is blowing up around you, sometimes you can really use a little old fashioned.

After the cataclysmic events in New York with The Avengers, Marvel’s “Captain America: The Winter Soldier” finds Steve Rogers, aka Captain America, living quietly in Washington, D.C. and trying to adjust to the modern world. But when a S.H.I.E.L.D. colleague comes under attack, Steve becomes embroiled in a web of intrigue that threatens to put the world at risk. Joining forces with Natasha Romanoff aka Black Widow, Captain America struggles to expose the ever-widening conspiracy while fighting off assailants sent to silence him at every turn. When the full scope of the villainous plot is revealed, Captain America and the Black Widow enlist the help of a new ally, the Falcon. However, they soon find themselves up against an unexpected and formidable enemy—the Winter Soldier.