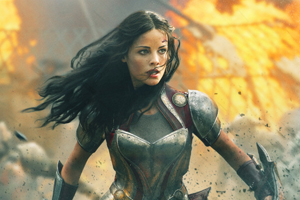 The first really big MARVEL big screen-to-small screen crossover has begun, hopefully the first among many. Jaimie Alexander (Kyle XY, Covert Affairs) is set to pay a visit to Marvel’s Agents of S.H.I.E.L.D. by reprising her big screen role of Sif for the television series.

Sif made her cinematic debut in the epic blockbuster “Thor: The Dark World,” and will be bringing her powers of Midgard to Earth. Her mission at the moment is classified – “S.H.I.E.L.D. Level 7 Eyes Only,” so, to find out what brings this super-heroine to our neck of the galaxy you will need to watch Agents of S.H.I.E.L.D. on ABC Tuesday nights.

Marvel Studios and ABC have yet to announce exactly what episode this season Alexander will appear, so stay tuned.