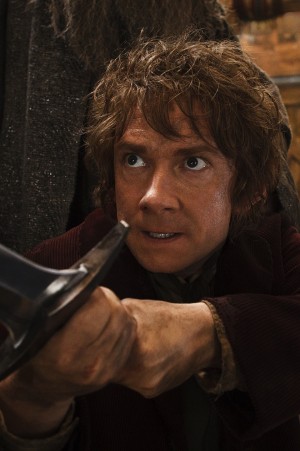 I admire Peter Jackson. I think that he has, in the past, done the impossible with his adaptations of J.R.R. Tolkien’s The Lord Of The Rings, and when I learned that he agreed to do The Hobbit I was delighted. Still, I did become just a wee bit concerned when I learned that he was stretching the book into, not two, but THREE movies. However, given the source material he was going to draw from to make this new trilogy work I was mostly filled with confidence. I was very happy when I saw that my confidence was not misplaced after seeing the first of the films, The Hobbit: An Unexpected Journey. I know that a lot of people really came down hard on that film, but I found myself totally in love with it even before the house lights came up. Sadly, I cannot make the exact same claim with The Hobbit: The Desolation of Smaug.

Again, the big issue, which a lot of people are going to either praise or criticize, is the adding of story material that did not originally appear in Tolkien’s book. I’m not going to make a case for or against such story additions as they did largely appear in other works by the author himself. However, I will make a case for how these scenes fit together with the rest of the movie. Director Peter Jackson did an amazing job at tightening the tension in some very important scenes with Thorin Oakenshield, Bilbo Baggins, and the rest of the dwarves in Thorin’s company. However, just when it seemed that the tension was about to become too much, Jackson would then switch to a storyline which was only briefly alluded to in the book, but clearly developed for the movie in great detail, and that is Gandalf’s journey to Dol Goldur to unravel the mystery behind the Necromancer. Once more Jackson gives us some rather intense action which served to ratchet up the tension even more, but again as it felt that the tension was going to snap Jackson would take us back to the perils that the dwarves were having to contend with. It was this back and forth between scenes that felt odd, as if the transition between the two stories was not well thought out, and while each storyline was very suspenseful, I found that they did not fit together very well.

The big additions that sometimes felt a bit unusual were the inclusion of Legolas and Tauriel, elves from the Woodland Realm. Now while Legolas was never in the book, his presence was not too disturbing as Tolkien had written elsewhere that he was the son of the Elven King Thranduil, whom we first meet in The Hobbit: An Unexpected Journey. Because of this it felt okay to see a familiar face from The Lord Of The Rings, even though his character is quite a bit different than the elf we all came to know. Still, it makes sense so the inclusion of his character did not seem too out of place. It is with Tauriel that it felt a bit strange. She was never in any of the Tolkien books and is a character created for the movie. As a result her presence seemed a bit unusual especially in how she responded to the dwarves. It almost felt as if Jackson was using her to take part of the story in a totally new direction, and what bothers me again is the tone of these scenes and how they don’t seem to quite mesh with the rest of the movie.

The real jewel of this film arrives after we are already 2 hours into the story, and that is the revealing of Smaug. What we are given here was so amazing, not just in terms of the visuals, but also in the story telling, that I found myself holding my breath with excited anticipation for what was going to happen next, despite the fact that I had already read the book and knew how it ended! It is here that Jackson really worked his magic and gave us something that was truly worthy of his previous efforts in bringing Middle-Earth to the big screen. Again, the story telling here is dramatic, exciting, and tight, from Smaug engaging in witty repartee with Bilbo, to the way he tries to chase down Thorn and company. There are no wasted scenes here to take the viewer out of this incredible experience, and the appearance of Smaug is so amazing I continually found myself asking, “Where did Peter Jackson find a gigantic talking dragon to act in his movie???” Sadly, there is no proper resolution to any of the scenes with Smaug because the movie just stops in a most abrupt manner. In fact, it was so abrupt that it actually generated some groans and complaints from the audience. It was most shocking how it came about which was then followed by a strong sense of disappointment when I suddenly remembered that it would be yet another year before I would actually get to see how Smaug’s part of the story ends.

This movie was filled with some great acting, especially from that of Martin Freeman as Bilbo Baggins. His performance was both subtle and amazing. The character developments were well thought out and clearly showed how each member of the party had grown since the story began. It might seem silly to say that since their characters were taken from the original novel, but it was still nice to see it portrayed on the screen. And yet, as I walked out of the theater thinking about what I had just watched, I did so with a slight sense of sadness.

However, I wanted to love it just as I loved the first Hobbit movie and the entire Rings trilogy. Those movies I deeply loved and I wanted to feel the same about this latest installment of The Hobbit. I really wanted to love it, but I didn’t. I only liked it.