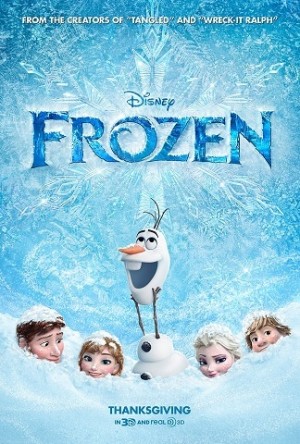 Inspired from the Hans Christian Anderson fable The Snow Queen, Disney’s Frozen has as much to do with the original fable as Frozen fits into the stereotypical Disney passive princess parable.

After the King and Queen of Arendelle are killed during a sailing accident, the two princess sisters, Anna and Elsa, are destined to rule the Kingdom. Elsa, who was born with magical powers of winter, has hidden herself away from her kingdom and sister after striking her with her magic accidentally when the two siblings were children. On Elsa’s coronation day, the two sisters are revealed to the kingdom after many years of isolation. Anna falls in love at first sight with a handsome Duke and asks her now Queen sister Elsa to bless their sudden engagement. Refusing to, Anna blows up at her sister, causing her frigid powers to surface and exposes herself to her kingdom. Running away from Arendelle, Queen Elsa causes an eternal winter in the land and vanishes to the mountains to the north.

Not only did Disney give us one strong female princess, they gave us two. Anna, although awkward and naive in the matters of love and men, is determined to save her sister and takes no grief from any one–even punching a prince in the face at one point during the film. Elsa, who is unable to control her powers of Ice and Snow and secludes herself from everyone out of fear, is able to work through her difficulties and loss of control and make amends for her mistakes. In Arendelle, the princesses do not sit idly by and wait for a man to come and save the day.

Frozen is one of the latest, and now greatest, Disney animated films that empower girls to be the masters of their own destiny. The film is even a little self-aware with the concepts of a Disney princess movie. The song Love is an Open Door depicts just how crazy love at first sight really is and another shows the ironic dream of a sentient snowman that desires nothing more than to experience the heat of summer.

Packed to the brim with Broadway stars and the sweeping songs throughout, Frozen just screams of a future Broadway show of the movie that Soccer Moms and Thespians will sing in their cars for years. I do believe that Frozen will be around for a long time, as a new classic from what some call, the “Second Renaissance” of Disney animated films — the first being in the nineties with Beauty and the Beast, Lion King, and, Tarzan. At least when there is eventually a Disney’s Frozen-On Ice! production, it will make sense story-wise.

Frozen is a forward thinking animated classic that is catchy, delightful, and will warm the most frozen of heart.