Ever since the first LEGO Movie, I’ve fallen in love. I adore how the stories build on family and connectedness. When the LEGO Batman movie came out, it was brilliantly funny and continued to show us how families can come together and how friends can be family. I was so excited for the newest film, LEGO Ninjago when I watched the trailer. While I saw the same themes and the connection to the previous films, it wasn’t quite as funny as the other two. It was fun, emotional, and Jackie Chan was the highlight for me.

The film takes place in Ninjago City which is routinely attacked by an evil warlord, Garmadon (Justin Theroux), who lives in a lava mountain with his four arms, hordes of generals, and massive amount of sharks. Meanwhile, his son Lloyd (David Franco) and his mother, KoKo (Olivia Munn) live in the city. Lloyd, who’s sixteen, hasn’t seen his father since he was a baby and is routinely vilified by the entire city for his father’s actions. Garmadon has yet to conquer the city due to a team of ninjas, each tied to an elemental power, led by the Green Ninja and his mentor, Master Wu (Jackie Chan). We quickly find out that the Green Ninja is secretly Lloyd and, unsurprisingly, he has a lot of issues with his dad. But with the help of his five friends, Cole (Fred Armisen), Jay (Kumail Nanjiani), Kai (Michael Peña), Nya (Abbi Jacobson) and Zane (Zach Woods), they keep the city safe.

Unfortunately, Lloyd’s anger over not having a relationship with his father boils over and he uses a forbidden weapon to attempt to rid the city of Garmadon for good. Unfortunately, it backfires and gives control of the city to his father, with he and his fellow ninjas on the run with Master Wu. They must travel to find a weapon that can defeat Lloyd’s father. The only problem, the ninjas need to learn to work together and no one trusts Lloyd after his mistake. Worse, Garmadon is after the weapon too. The ninjas are unable to tap into their elemental powers without their mech. Lloyd must find a way to tap into his inner power to come up with a solution and save the city. 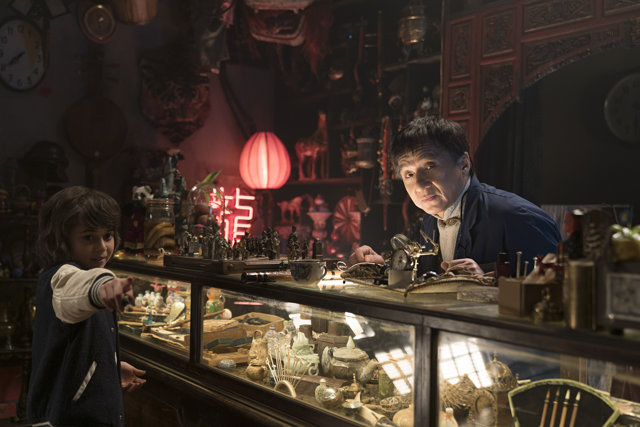 One of the most interesting aspects to the story is that it begins with a live action sequence with a young boy who enters an Asian Curio shop who meets the shop owner, Mr. Liu (Jackie Chan), and shows off his Lego character named Lloyd. The figurine has no arm and the boy thinks this means it’s not as special. Mr. Liu explains he needs to learn to look at things in a new way and tells him a story, which is the animated portion of the film. The blending of live action and animation makes for an interesting technique and brings in aspects from the original Lego movie. In addition, the curio shop is a great reference to the animated Jackie Chan Adventures which were a humorous take on martial arts movies, allowing the audience to know that LEGO Ninjago won’t be taking itself too seriously.

The film gives us reference to the old Godzilla movies, the giant mech cartoons such as Voltron, Power Rangers and even the old Hong Kong martial arts movies. It pokes fun at all of them while still building a coherent story with some solid emotion to it. One of the parts I liked the best is that Garmadon struggles with connecting with Lloyd and yet he never changes who he is for his son. Lloyd has to find a way to accept who he is and who his father is, coming to terms with the relationship. I enjoyed that there is an emotional story about relationships at the heart of the film.

There are some incredibly funny parts. The sharks used by Garmadon were funny every time they were on screen and the cat that attacks the city, Mrowthra, is hilarious, especially with the giant monster nod. If you are a cat owner, you will love the sequences with the cat. There are plenty of jokes themed around martial arts movies and even some jokes about the giant mechs the teens use in the beginning of the film. Even the Ultimate weapon pokes fun at the tropes used in most Asian themed movies. Jackie Chan is especially funny as Master Wu, poking fun at characters he’s played in films.

The voice actors do a great job with their parts. David Franco plays Lloyd as sweet but also frustrated with the choices his father has made. Justin Theroux portrays Garmadon as over the top evil but ultimately wanting time with his son, even if Lloyd isn’t what he expects. Jackie Chan is awesome and in the live action sequences embraces his physical comedy. He isn’t playing a part much different than we’ve seen in the past but in doing so, his sense of humor is apparent as he plays his character for laughs. The rest of the ninjas do a good job. I especially liked Zach Woods as Zane. As the ice ninja, he does a brilliant job and his portrayal made me laugh as much as Jackie Chan.

For me, where it loses some of the momentum of the previous two movies, is in the some of the jokes. It loses viewers who don’t have the frame of reference for the multiple ninja or martial arts jokes. While I’ve watched some of those films and cartoons, I am certain I missed many references and some of the jokes fell flat due to that issue. Whereas the other two movies made certain to maintain humor that everyone would understand, this film did not have that wider appeal.

If you love ninja movies, giant monsters or Power Rangers, this one will be right up your alley. If you’re a fan of martial arts films, you will get most of the jokes and enjoy this immensely. As part of the LEGO chain, it builds on the same themes of connection and building relationships that will warm your heart even if you don’t get every laugh. Most of all, if you are a family, you will love Lloyd and will have a blast. It is warm and full of action with some of the best acting by Jackie Chan, David Franco, and Zach Woods. And I dare you not to laugh at the sharks (they’re sharktastic!) and Mrowthra.

The battle for NINJAGO City calls to action young Master Builder Lloyd, aka the Green Ninja (Dave Franco), along with his friends, who are all secret ninja warriors. Led by Master Wu (Jackie Chan), as wise-cracking as he is wise, they must defeat evil warlord Garmadon (Justin Theroux), the Worst Guy Ever, who also happens to be Lloyd’s dad. Pitting mech against mech and father against son, the epic showdown will test this fierce but undisciplined team of modern-day ninjas who must learn to check their egos and pull together to unleash their inner power of Spinjitzu.

If you love ninja movies, giant monsters or Power Rangers, this one will be right up your alley. If you’re a fan of martial arts films, you will get most of the jokes and enjoy this immensely