Released in 2002 for the PS2, Ratchet and Clank was a wonderful platform game that was loved by critics and fans alike. Over the years Sony has released sequels and with each one, the Ratchet and Clank franchise has remained a fan favorite.

Announced at the 2014 E3 Conference, Ratchet and Clank was a re-imagining of the 2002 PS2 game that would now see new life on the advanced Sony PS4 gaming system. Since it’s April 2016 release, the game has received great reviews and seemingly re-energized it’s platform brand. To coincide with the new game release, Sony has released a movie to bring Ratchet and Clank to a larger audience. A risky move no doubt, but if successful, the gamble would create more interest in the franchise. So, does the movie capture the wonderful charm and humor of the game? Unfortunately, no.

Having played Ratchet and Clank over the years the I’ve come to appreciate the characters and oddball sense of humor. So why doesn’t the movie work? The story is lifted from the current PS4 game so that should be a plus right? Despite it’s simplistic storyline, Ratchet and Clank excels as platform game but on the big screen, everything seems average and boring. The same jokes and clever wordplay just don’t have the same effect as they did in the game. 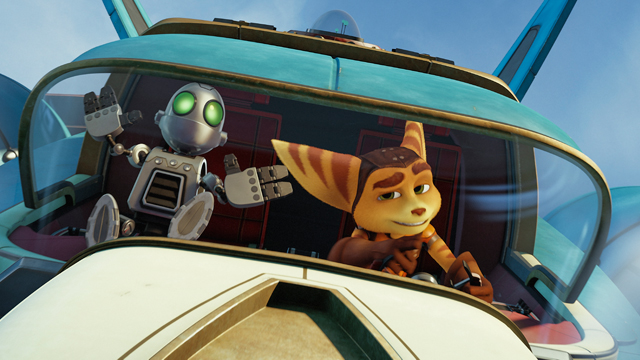 Ratchet (James Arnold Taylor) is a sharp witted worbot that befriends a robot reject named Clank (David Kaye). Their friendship and teamwork are integral in stopping in to the evil antagonists Chairman Drek (Paul Giamatti) and Dr. Nefarious (Armin Shimerman) from destroying every planet in the Solana Galaxy. During this quest, we see Ratchet become a Galactic Ranger much to the dismay of the legendary ranger Captain Qwark (Jim Ward).

The Galactic Rangers are basically a group of highly skilled individuals whose sole purpose is to defend against forces of evil. During this quest, we are introduced to a vast array of weaponry that does offer moments of humor. For example, the Sheepinator (momentarily transforms it’s victims into sheep) and the Thunder Clap (Tornado Launcher) offer funny yet brief scenes of amusement.

Overall, my biggest problem with Ratchet and Clank is convincing it’s audience to even care or want to watch it. With all of the great animated movies to choose from, mediocrity just doesn’t cut it. Ultimately, that’s a shame because as a video game, Ratchet and Clank is anything but mediocre.

Ratchet and Clank tells the story of two unlikely heroes as they struggle to stop a vile alien named Chairman Drek from destroying every planet in the Solana Galaxy. When the two stumble upon a dangerous weapon capable of destroying entire planets, they must join forces with a team of colorful heroes called The Galactic Rangers in order to save the galaxy. Along the way they’ll learn about heroism, friendship, and the importance of discovering one’s own identity.

Overall, my biggest problem with Ratchet and Clank is convincing it’s audience to even care or want to watch it. With all of the great animated movies to choose from, mediocrity just doesn’t cut it. Ultimately, that’s a shame because as a video game, Ratchet and Clank is anything but mediocre.